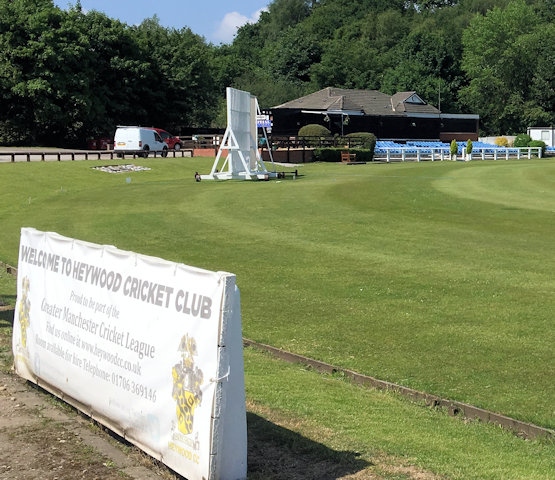 Bobby Cross sent alarms bells ringing among players and supporters when he dislocated his little finger towards the end of the Middleton innings in Sunday’s friendly at Heywood Cricket Club.

Heywood’s all-time record run scorer dived to field a shot on the boundary edge and managed to stop the ball, but it soon became clear that all was not well.

He was forced to retire to the pavilion but managed to re-align the ugly dislocation himself and submerged his finger in ice, with fingers crossed by many people that he would not be forced to miss the start of next week’s Greater Manchester League season – let alone bat in the current game.

Yet the 36-year-old allayed fears when he walked out to open the innings and reveal the type of classy form that Heywood have relied on over a period of more than 20 years.

The home side faced a victory target of 127, after containing Middleton for 126-8 from their 40 overs, and they quickly lost new signing James Kettleborough for seven with the total just eight.

But then Cross took over and produced some of his best form to race to 78, featuring two sixes and 11 fours, from 65 balls to set up Heywood’s four-wicket victory from just 24.4 overs.

He lost Mikey Witts without scoring and skipper Sean Burrill for nine, and at 43-3 the match – albeit a friendly – still looked in the balance.

But Andy Dawson then proved a reliable influence at the other end as the fourth-wicket stand realised 76 in double quick time, with Cross taking toll of the visiting attack.

So, it was a shame when, on the cusp of victory and the scoreboard showing 119-3, Cross pulled a short ball to mid-on and was sent packing with just eight runs needed.

Wes Hunt and Simon Dawson quickly followed him for ducks, but Andy Dawson made sure that there were no further alarms by strolling to an unbeaten 26 – encouraging form following his contribution of 47 against a Lancashire Under-19s side the previous day.

The Heywood attack had earlier plugged away to contain the Middleton batting line-up, with Kettleborough again showing that his off-spin with be a useful asset in a return of 2-18 from eight overs.

And Adam Fawcett, answering a call into the side following the withdrawal of Paul Bennett, claimed the last three wickets to finish with 3-13 from four overs.