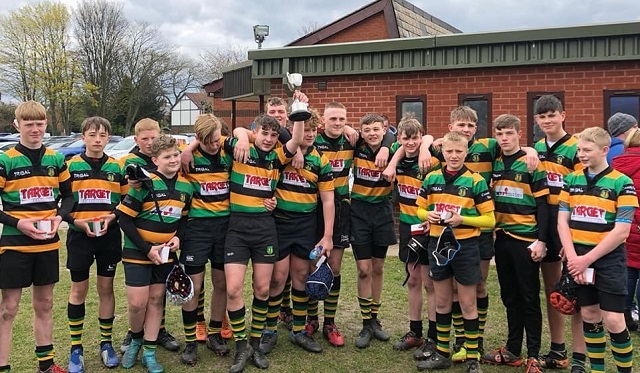 Sunday 14 April was the day of the Lancashire Cup Vase final between Littleborough U14s and their counterparts from Sedgley Park RUFC. The finals day venue was Aldwinians RUFC, on what was a pleasant, but cold and breezy day.

The teams have met twice during the season already, with Littleborough taking the spoils in the Lancashire Cup group games (27-26), and Sedgley Park (26-29) in a subsequent friendly match between the parties. All signs pointed to a close, and hard-fought encounter.

Littleborough won the toss and decided to change ends to take advantage of the breezy conditions in the first half, and Sedgley then opted to kick the ball to Littleborough at kick off.  In the early moments the boys controlled the game and the ball really well and moved up-field into Sedgley territory. Possession was then lost, and this was all the invite that was needed to release the Sedgley backs. A couple of passes later and the Sedgley winger ran the length of the field to score the first try of the game under the sticks.  The conversion was scored.

The early signs were that this was a game that would be won by Littleborough by their forwards, and that any sloppy play would cause problems with the pacey back in the Sedgley ranks. This is how the game panned out. Littleborough were focussed on using their forwards to maintain possession and territory, whereas Sedgley sought to release their backs at the earliest opportunity and exploit the space on the flanks.

There was an ebb and flow in the game in terms of both territory and possession the first half, with both sides a little guilty of spilling the ball. However, following a period of sustained pressure the boys were able to convert when Ben Crabtree broke through the Sedgley defence to score. Jacob Brady scored the conversion to level the scores at 7-7.

Both sides continued to have spells of possession in the remainder of the first half, the difference being that Sedgley were able to take full advantage of any loose play from Littleborough, and they scored a further two (unconverted) tries in the first half.  At the sound of the half-time whistle Littleborough trailed 7-17.

Despite a good start to the second period Littleborough were again punished when the ball was turned over and Sedgley were able to break through the Boro defence to score once more. The conversion was successful, meaning that Littleborough now trailed by 7-24.

The character and spirit of the Boro team however, cannot be faulted, and they continued to play their game. In the main, they cut out silly mistakes for the remainder of the game and for large parts of the second period they controlled both possession and territory.

The pressure told on the Sedgley line when Ben Crabtree crashed over to score once more. The conversion was scored by Jacob Brady, meaning the score now read 14-24.

Littleborough continued to assert pressure on their opponents, but whilst deep in the Sedgley half the ball was turned over and Sedgley were again able to release their backs. The winger kicked deep and foot race ensued.  Thankfully Max Risby was able to sprint back and collect the ball in his in-goal area. He dummied the on-rushing attacker and was able to gain time and territory to allow his fellow defenders to get back in position and ensure possession was maintained.

A Sedgley score at this time would surely have signalled the end of the contest, but thankfully the boys in black, green and yellow were able to dig deep and get themselves out of trouble.

Littleborough again moved up-field in search of another score and put pressure on their opponents, and when Ben Willocks rounded his defender, and cut in field it looked certain that he would score. However, a Sedgley defender managed to stop him and complete the tackle and hold Willocks up short of the line.

This led to a frantic few minutes of the visitors being camped on the Sedgley line, and just when it looked as though the try line would be breached, the ball was knocked on.

Littleborough’s Under 14s were now up against the clock and with time was fast running out; five minutes or so left on the clock, they still trailed by 10 points (14-24).

But all credit to them, they did not allow the pressure to get to them and they continued to play good rugby and apply pressure on the Sedgley defence. The pressure eventually told when Ben Crabtree scored his third try of the game. The conversion was scored by Jacob Brady.

From the resultant re-start the boys put Sedgley deep in their half and made it difficult to get out. Play remained in the Sedgley half for the remainder of the game. During this period both Ben Willocks and Max Risby came within centimetres of scoring.

Upon the referees’ call of last play, Littleborough were faced with an attacking scrum five metres from the Sedgley line.

When the pass didn’t go to hand from the scrum it appeared the chance to score had been lost. However, the boys kept their cool and were able to re-set. The ball was then passed to Olly Mills and he burst through the Sedgley defenders to score the match-winning try. The conversion was scored by Jacob Brady.

This signalled the end of the game and celebrations from the lads, coaches and parents alike.

The final score was 28-24 to Littleborough, in what was a roller coaster of a game, and was nerve shredding throughout. The Littleborough boys were incredible, and they were well deserving winners in the end.

A spokesman for the club said: "The Littleborough boys were incredible, and they were well deserving winners in the end. We were, and are, very proud of these boys and the effort that they put for the team, and the club on a weekly basis. I have to give credit to Sedgley Park for a thoroughly enjoyable game of rugby."

The presentation ensued and all the Littleborough boys were all awarded with winners’ medals, and the trophy was then presented to the winning captain.