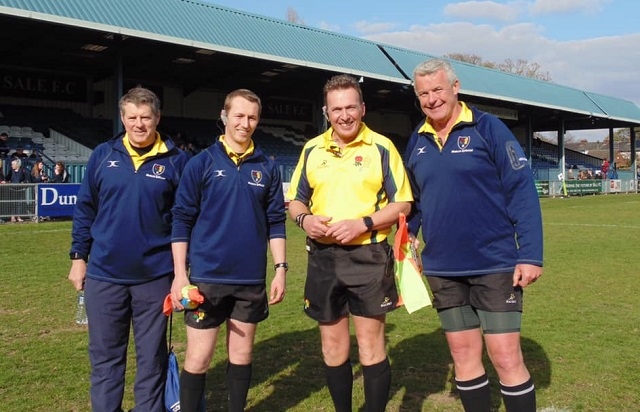 Mike Keiley, in the yellow, with his fellow officials in his first home international as England's Deaf side defeated Wales Deaf side

If you were ever asked to name an international referee in sport, who would it be? Some of you may say the iconic Pierluigi Collina, the Italian with piercing blue eyes who is widely considered to be the best football referee of all time.

Alternatively, you may think of Welshman Nigel Owens. The diminutive yet charismatic rugby referee whose own line of catchphrases like ‘this is not football’ and ‘if you don't like scrummaging, you’re in the wrong position’ have seen him become of the most revered and favoured adjudicators across the globe.

One name you may never have heard of is Mike Keiley, from Whitworth.

Mike, who calls Littleborough Rugby Club his home, has as of last week, Saturday 13 April, become a recognised international referee.

The 50-year-old officiated his first home international as England's Deaf side defeated Wales Deaf side to reclaim the Broadstreet Cup by a score of 22-6 at Sale FC's CorpArc Stadium.

Taking the spot as the match referee, Mike Keiley played a part in an exciting double header that also saw England's Deaf Women narrowly succumb to a 30-nil loss to Sale 1861 at a packed Heywood Road.

Mr Keiley joined the Manchester and District Referee Society 10 years ago and in honour of his long and faithful service was given the helm and the whistle for the big occasion, much to his surprise.

Aaron Jones from Littleborough RUFC spoke to Mike prior to the game and asked him how he will adapt his game to suit the type of players he will be officiating.

Mike said: "Actually most of the players have restricted hearing. Only a couple of players are without hearing. They receive a tap on the shoulder from one of their own players when the whistle has gone.

“The touch judge is allowed to approach the player on the pitch if he feels they have missed the instruction.

“We have to exaggerate our normal hand signals and at scrum engagement I put one hand in between the front rows and pull it away to signal the engagement.

“Most of these players play normal rugby for their clubs, some at quite a high level.

Days after the game, Aaron caught up with Mike again and once more the infectious smile was there for all to see.

Mike said: "Obviously very honoured to have been asked. The match and match day experience was amazing, I was very nervous before the game especially with it being streamed live, plus being mic’d up as well on the BBC.

"The guys were certainly competitive; that English/Welsh rivalry extended to the amateurs. The game was close for about 60 minutes, but England were always the stronger team and scored two tries at the 65 min mark, this really killed off the game.

“There was a presentation after the match where new players were presented with their international cap; myself and the assistant referees received an international tie from both sides.

“It was certainly educational as regards to some of the hurdles people with disabilities have, getting into mainstream sports.

“Deaf rugby players want to be refereed by everyday normal refs. The only difference was the scrum; the idea is to integrate deaf or hearing-impaired players into mainstream rugby."