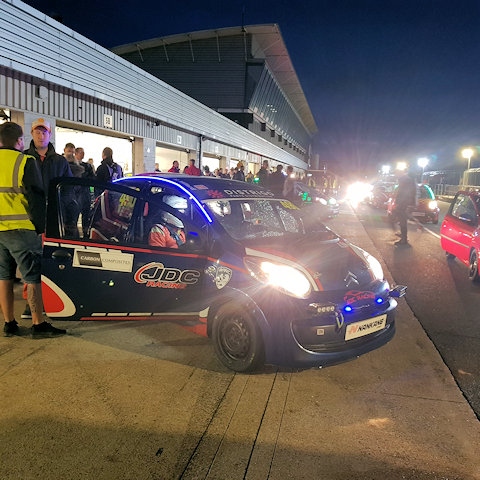 After a gruelling 90-minute session; the team came away with a respectable 72nd, beating professional teams and drivers along the way.

The race started at 5.30pm Saturday night in dry conditions, with the first stints taking teams to the brink of darkness as they pushed to stretch a tank of fuel and set of tyres as far as they would go.

As the first rounds of pitstops where completed, darkness fell and the rain and wind came in, which caused some tricky driving conditions; but JDC Racing sat in a respectable 41st.

The safety car played a big part in the night’s proceedings, with many cars spinning off or worse having the odd roll.

Fortunately, JDC Racing avoided any major issues, with just one spin onto the gravel, costing the team a three-lap penalty during the middle of the night.

As dawn broke and the sun came up, JDC Racing had battled from 72nd to 55th following on from the penalty, although the team had been as high as 26th at one point during the night.

Unfortunately, another couple of Stop & Go penalties hampered progress back up the field.

Some skill and determination from all the drivers saw the team start to jump back up the leaderboard, with laptimes getting quicker throughout the Sunday morning.

As the chequered flag fell, after 24 hours of racing, the team crossed the finishing line in a respectable 39th place; the car in one piece, and the team jubilant but exhausted.

A spokesperson from JDC Racing said: "It was a great weekend and a brilliant experience for the team to do their first 24-hour race and to finish having done 383 laps, over 1300 miles. We would like to thank all our drivers and especially all the pit crew."

The team now face a four week break before the next race at Anglesey.