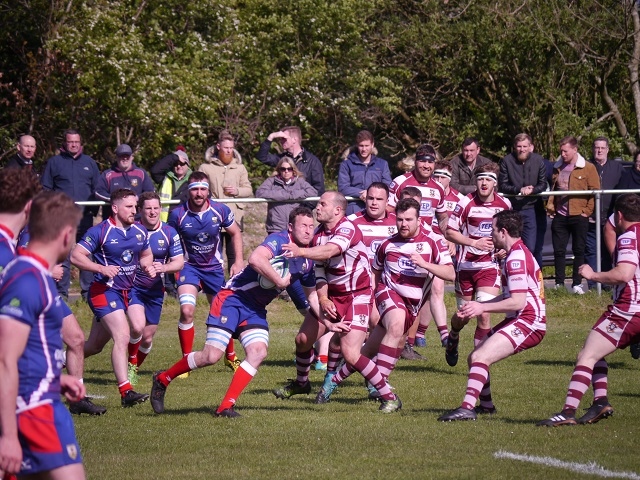 On an afternoon of finals at Moorgate Avenue, Rochdale were last on against Blackburn in the Lancashire Cup Final, Blackburn had just finished runners up at level five having had their best season.

Rochdale were without Beltus Nonleh who had picked up an injury playing for Lancashire and Chris Hodgkinson who was still suffering from a concussion picked up at Tarleton some weeks before.

In the opening minutes it was clear that the strong easterly wind would play a role Rochdale started with it at their backs and both James Duffy and Ollie Coldman made the most of it with lofted kicks taking Rochdale into the Blackburn 22.

Five minutes in and the visitors were looking shocked at Rochdale’s aggressive play and gave away a penalty 30 metres out. The kick went just wide in the swirling wind and a chance for an early lead with it.

Moments later another penalty this time going for touch, but the wind drove the ball over the in-goal area and led to a drop out for Blackburn.

With 15 minutes gone Rochdale were unlucky to be denied a try. A high kick was well taken by Blair Henry on the Rochdale left wing. He made good ground and then chipped the ball over the defenders only to see the referee give no try after a mass of players arrived on the line together, scrum to Blackburn.

The visitors now had their first sustained spell of pressure in the Dale half. Despite good defending Rochdale conceded a line out on their own 22 metre line and after a clean take the Blackburn forwards powered towards the line and at the second attempt crossed the whitewash to score near the posts for a converted try 0-7.

Shaun Needham had led Rochdale well and it was he who broke from the back of the scrum on the visitors 22 metre line to make it to five metres out only to be pulled down and injured in a desperate tackle by half the Blackburn pack.

When play resumed it was the visitors who pushed hard into the Rochdale half and a series of penalties culminated in Ross Hartley being yellow carded for a high tackle.

Down to 14 men, Rochdale were on the back foot for the first time in the game and when an overlap appeared on the left wing it seemed that another Blackburn try was on but the winger fumbled the ball as he crossed the line and was bundled into touch by the desperate Rochdale defenders.

Despite all their efforts and some great tackles, Rochdale could not hold out until half time. When a scrum 10 metres out was won by the visitors their strong centre managed to nip through to score an unconverted try. 0-12 and half time could not come soon enough.

Rochdale made some changes at half time Jimmy Flitcroft had damaged his knee just before half time and was replaced by Rob Wadsworth. Dale Slamon and Gui Desousa came on in the pack, Ross Hartley was soon restored and was straight back in the thick of it with a crunching tackle on the Blackburn out half as he cleared the ball.

Another addition in the backs was Jonny Mair who linked up well with captain Dom Serridge to go over in the corner for Rochdale’s first try, the wind almost stopped James Duffy’s conversion dead so 5-12 was the score with only ten minutes of the half gone.

Shaun Needham was still causing lots of problems and when he received a short pass from Duffy on the Blackburn 22 metre line he was hit with a high tackle giving Rochdale another chance of points. Duffy made no mistake and judged the wind well to slot over and make it 8-12.

Blackburn were back on the attack and with new personnel they battered the Rochdale line but great tackles from Hartley and Tom Hindle kept them out until finally from a penalty the visitors had a line out on the Rochdale five metre line. They took the ball down and were able to cross the line for a good try.

The conversion was wide so 8-17 was the score as the teams went into the last quarter of the game.

Rochdale were back into the Blackburn half and they meant business when the combination of Mair and Needham broke through this time, it was Needham who scored and Duffy was able to defeat the wind and take the extras 15-17.

Blackburn again ramped up the pressure, but Rochdale held firm and came back well breaking forward with good passing moves. The referee, who had done well despite having to warn both sides for high tackles now stepped in and gave hard working prop Harry Hill a card for a late tackle.

This again swung the balance and from the penalty the visitors won the ball in the line out and on the Rochdale ten metre line the ball was knocked forward by Rochdale in the tackle and a scrum awarded. Blackburn broke from the back and scored wide on the right the conversion was well wide so the score with five minutes to go was 15-22.

Rochdale refused to lie down and a series of scrums in front of the posts led to the third yellow card of the game. This time the Blackburn second row got his marching orders.

The ball came back from the next scrum with a mass of players in the corner and Mair seemed to go over to make it 20-22 with only the conversion to come to take the game to extra time. James Duffy had a difficult kick from the left touchline he waited for the wind to die down and struck only to see the ball fall just short of the posts.

The whistle blew in the next minute, this was a great final and Rochdale had played their part. Many of the Blackburn supporters said it was the hardest game they had played all season.

Rochdale coach Danny Collins said: “ I am proud of the lads and their never say die attitude, I am looking forward to next season.”