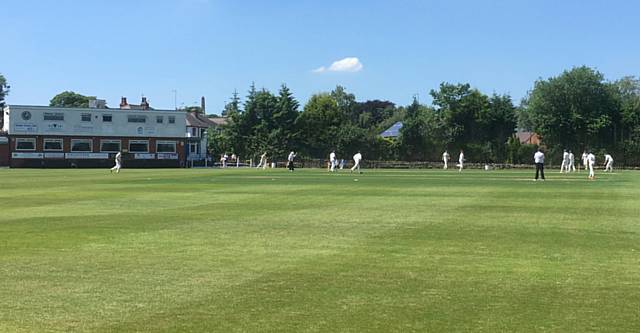 Jake Sandham’s six for 42 helped Norden Cricket Club to a home victory over Darwen on Sunday 12 May, but it was a victory which should have been much easier to secure.

Darwen, the Lancashire Cup holders, were on their knees at 78 for nine, but the last pairing piled on the runs which left Norden chasing a target of 150.

Again Norden inability to kill a team off reared its ugly head, but all came right in the end.

Sandham first struck with the Darwen score on 14 when Jordan Clarke smacked the ball straight to Josh Tolley in the covers.

Four runs later Scott Friend skied a delivery from Chris Humphreys and saw Greg Butterworth take the catch on the drop from high.

It became 26 for three with one of the highlights of the match.

John Cordingley swished at a Sandham delivery outside the off stump, and wicket-keeper Lee Crabtree took a stunning diving stretched catch.

Scott Jackson and stand-in professional Neels Bergh managed to add 30 before the former skied off Chris Humphreys to be caught by Hashum Malik.

Bergh was next to go, leg before to Sandham, with Reece Willetts, Mark Friend, Chris Lowe and David Bowden quickly following.

The innings looked done and dusted at 78 for nine, but Norden then tried spin for a few overs which didn’t work, and Darwen’s last men Kamran Anwar and Niall Burke put on 71 before Dominic Humphreys had Anwar caught behind by Lee Crabtree for 49.

The reply saw Josh Tolley out for 15, but Harvey Fitton and Saif Bhojani took the total up to 65 with a six from Fitton. The next delivery saw Fitton caught low on the boundary edge by Scott Jackson’s tremendous effort.

Dominic Humphreys smacked 18 off nine balls before falling to the spin of Bergh, Greg Butterworth was caught off Anwar.

Sandham was the other wicket to fall with only three runs required for the win. He went for a big hit off Anwar, missed, and was bowled for 33.

Earlier, Sandham had hit a massive six as he opened up following a restrained start to his innings.

The remaining runs were quickly secured.