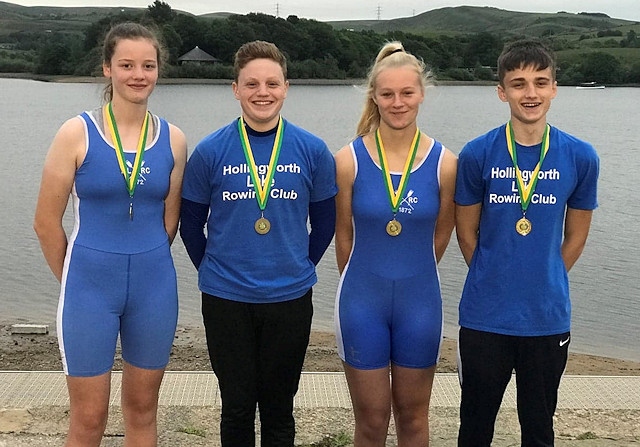 This Bank Holiday Monday (27 May) saw Tia Lenihan, Grace Darnbrough, Sam Harrage and George Tisdall, all Junior members of Hollingworth Lake Rowing Club, compete in the Spring Regatta at Northwich which took place on the River Weaver over a 500m course.

Their mixed quad raced well considering this was the first time it had raced together and was competing against all male teams – the boat was coxed by vice-captain Leanna Daniels.

Both won all their heats to take home the winners medals in each event. With only a little rest, they then competed in the WJ15 doubles, again winning all their heats and winning their second medals of the day.

George and Sam then raced again – this time in their J15 singles. Sam won one of his heats, but George won all three of his taking home the winner’s medal with style.

It was then their turn to have a quick turn around and go out to race in the J15 double event.

By this time, the weather had taken a huge turn for the worse and the boys got soaked.

All the crews were cold and wet before they had even raced. By the time the heats were taking place, all just wanted to get it over with and get back to the clubhouse and into dry clothes.

They didn’t win their heats, but were thoroughly soaked by the time they had finished racing and come off the water.

Their coach and club captain, Ian John said: “After hard months of winters training, they all performed beyond expectations – they should all be very happy with the results.”

This is their third regatta of the year so far, with Grace, Tia and Sam winning at York last weekend, where the club’s seniors and masters also had some good wins.

This weekend the club is taking 15 crews of juniors, seniors and masters to race at Trentham Regatta on Sunday (2 June).