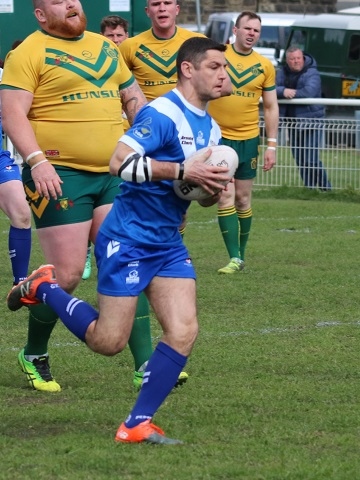 Forced once again into changes Sam Butterworth's side could have been forgiven for going into this game down hearted.

The loss of in-form forward James Tilley, who became the latest in a long line of Mayfield players who have gone into the pro game this season, could have been problematic but this side came out full of confidence and played like a top three rather than a bottom three side.

Within the first five minutes Mayfield had created two scoring chances through a Zac Hartley kick and a superb off load from Shaun Hurley, only great defence from the visitors kept them out.

Underbank sensed the Mayfield mood and opted to take the two points on offer as they were awarded a penalty for a high tackle after just five minutes, 0 - 2.

The Mayfield pack were getting on top of their opposite numbers and being well marshalled by the returning Ieuan Higgs and Zac Hartley, they looked to go forward at every opportunity and defended with strength and numbers when they had to.

With ten minutes on the clock a tackle from Jimmy Connoughton was penalised by the referee with a red card and Underbank lifted their game to capitalise on their advantage but gave away a couple of penalties in the process.

Mayfield accepted these and Hartley slotted them over to give his side the lead, 4 - 2.

It took almost half an hour before the first try and this was testament to the solid defensive efforts from both sets of players in the driving rain.

Mayfield had been camped in the Underbank twenty with Luke Foden, Rob Kershaw and Liam Whalley repeatedly driving at the line before a long cut out pass from Wayne English created the space for Declan Sheridan to sneak over, Hartley converted for 10 - 2.

Mayfield went straight back upfield to try and add to the score but were kept out by the resolute defence. Underbank hit back on the break and forced their way down field only to be denied by James McDaid and Lewis Butterworth combining in the tackle.

With half time looming Mayfield looked the far better side, belying their current status and after great defending from Jack McConnachie, Hargreaves and McDaid took them back into the danger zone. McDaid scored a great try, Hartley again converted, 16 - 2 at half time and Mayfield looked in control, playing with belief, but more importantly playing to the game plan they have been working on at training.

The break suited the visitors more than it suited Mayfield, it allowed them to regroup and disrupt the flow of the home side.

The defence from both sides in the second half was superb, McConnachie, Samanyanga, Connolly and McDonald worked overtime in this department.

It took twenty minutes before either side could break the deadlock, when Hartley added another two points, and Connolly sensing the need for a points cushion, slotted over a one pointer.

The crowd were loving this game, it’s been a while since their team were in this position and they showed their appreciation.

Every 50/50 decision seemed to be going Underbank's way, and this seemed to rally the supporters as they roared Mayfield on.

With Wayne English down injured the referee decided to play on as Underbank forced their way toward the Mayfield line, this gave them a two man advantage and they worked this well, as the Mayfield players appealed for a stoppage, they ploughed on and crashed through for a try, out wide, 19 - 6.

Mayfield were undeterred and went straight back at them and some superb rugby in atrocious conditions saw Liam Whalley crown his return with a well-deserved try, unfortunately the Underbank team took exception to this and a small fracas broke out which resulted in Whalley becoming the second Mayfield player to be shown the red card, Hartley added the two, to round off the scoring, 25 - 6.

This was a very competent performance from the home side showing what they are capable of. They started the game with a plan and stuck to it throughout, giving themselves the time and space to play rugby, this coupled with a fantastic defensive, effort proved too much for a side that was pushing for a place in the play offs.

There were some great performances from Mayfield; Whalley was outstanding, Connolly and Sheridan interchanged well and Shaun Hurley stood strong in the forwards. In the backs the defence was solid from Butterworth and McConnachie, who had probably his best game of the season so far.

The Man of the Match award was a split decision with the coaches going for Wayne English who showed great composure whilst marshalling from the back. The Recruitment Solutions sponsors Man of the Match went to blockbusting forward Luke Fowden who was non-stop, causing Underbank problems all game.