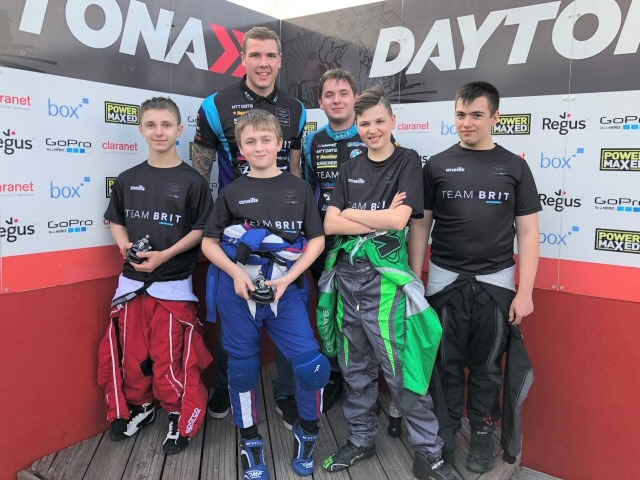 Two young drivers from Rochdale, who live with autism, have competed in a charity karting event as part of the team ‘Racing with Autism’ (RWA).

Hosted by Team BRIT who support drivers with a range of physical and psychological challenges to access motorsport, 12-year-old Sandro Ballesteros and 22-year-old Matty Street, CEO of Rochdale’s TeamKarting and Team RWA Captain, took to the races on Tuesday 6 August 2019 at Brands Hatch, Kent.

Their team - Team RWA - is made up of six drivers, all with autism, and consisted of two teams of three young drivers on the day, racing against 16 other teams in a three-hour endurance race.

Matty and Sandro’s team put it in a fantastic performance, finishing 4th out of 18 teams, with the other RWA team finishing in 2nd place.

Sandro was diagnosed with autism when he was three and had his first experience in a kart aged five. He began racing in Daytona Bambinos and won his first Bambino Championship in his second year of karting, aged 7.

In his first year of junior championships, Sandro has managed 4th and 5th place, now lying in 7th as one of the youngest on the grid.

He also gives presentations at primary schools and was recently asked to speak at an autism conference with an audience of 120 people, including teachers, parents, and professionals.

Matty was diagnosed with dyslexia, dyspraxia and Asperger’s (a form of autism) when he was at school. He won a £30k scholarship to go racing at the age of 14 and studied motorsport engineering before securing a degree.

He said: "At the age of 12, I discovered karting, which had a huge effect on me and helped me manage the challenges that Asperger’s can cause."

Matty now runs Rochdale’s TeamKarting, the UK’s highest rated karting track, and has won an award for being Autism Friendly.

Together, TeamKarting and Sandro’s Able Racing project have helped introduce numerous autistic children to karting, some of which are now racing outdoors.

Matty and RWA team founder, Dave Player, invited Sandro and his fellow young kart racers to form a team, putting the other teams of sponsors and corporate supporters to the test.

It is hoped that the team will come together again for more events throughout the year, supported by Team BRIT.

Sandro’s father, Tony Ballesteros, said: “The moment Sandro put on a helmet we saw a calmness in him we had never seen before, and some of the autistic traits turned out to be well suited to karting; his hyper-focus, determination, fearlessness, attention to detail and rules. Cutting out all other inputs down to only what you can see through the visor, leads to some extraordinary reactions and consistency.

“Events such as the race with Team BRIT on Tuesday are great for Sandro. They give him a feeling of belonging and acceptance through the drivers’ common interest in the paddock, which has brought on not only his social skills, but helped with self-confidence, fairness, sportsmanship, dealing with failure and disappointment, relationships and teamwork.”

Team BRIT is aiming to become the first ever all-disabled team to race in the Le Mans 24 hour. Recently, the team supported Matty in starting his car racing career.