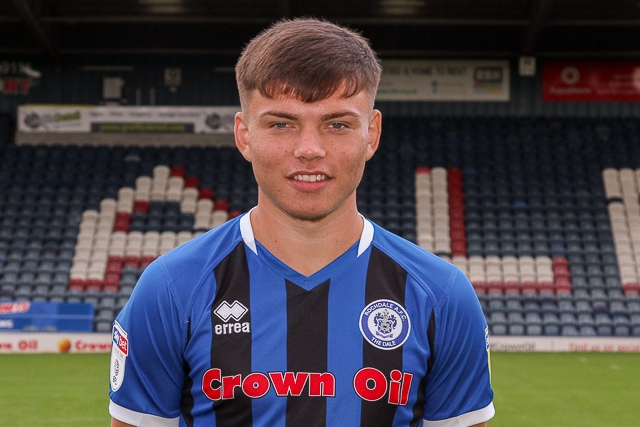 Rochdale progressed to the third round of the EFL Cup for the first time since 2011 after beating Carlisle United 2-1 at the Crown Oil Arena.

A stunning strike from Aaron Morley was followed up by Matty Done’s first of the season as Dale went in at the break 2-0 up.

The visitors were given a lifeline midway through the second half when Eoghan O’Connell brought down substitute Harry McKirdy inside the box; Jack Bridge slamming home the resultant penalty. Carlisle felt they should have been awarded another spot kick when the ball appeared to strike the hand of Dale’s Jimmy Keohane in the area; referee Peter Wright turning down the vociferous appeals from the Cumbrians.

Brian Barry-Murphy made five changes to his side for the visit of Carlisle United. Tyler Magloire, Jimmy Keohane, Aaron Morley, Matty Done and Calvin Andrew were all given starts.

On very warm evening, both sides tried to play football on a slick, heavily watered pitch and it was Dale who edged in front after eleven minutes. Matty Done’s breakaway saw him play out to the overlapping Keohane and when the Irishman checked his run and pulled back to Morley, the 19 year-old fired an unstoppable shot into the top left hand corner of the goal from 30 yards out.

Carlisle responded well and it took some fine defending from Magloire to stop Hallam Hope levelling the game. The former Everton academy graduate beat the offside trap but as he bore down on goal; Magloire used his unbelievable pace to get back and smother out the danger.

Dale doubled their advantage just after the half hour mark through Done. Calvin Andrew’s presence forced Byron Webster into a mistake with his defensive header playing the Dale striker in on goal. With just Adam Collin to beat, Done slotted past the keeper to make it 2-0.

The early stages of the second half saw the home side fire off target on a couple of occasions. Callum Camps and Aaron Morley both missed the target when well placed.

A double change for the visitors brought about a change in the flow of the game and the pace of Harry McKirdy; on loan from Aston Villa forced Dale deeper and when he burst into the area, O’Connell felled the 22 year-old with referee Wright pointing to the spot. Jack Bridge stepped up to smash the ball down the middle of the goal to half the deficit.

Eight minutes later and the league two side felt they should have had another penalty. McKirdy’s cross from the right hand side of the area seemingly hit an outstretched arm of Jimmy Keohane; the officials deeming it accidental and awarding a corner.

That decision incensed the visitors and in the final ten minutes they threw everything forward but Rochdale withstood the onslaught to record their passage through to round three.

The draw for the third round will take place on Wednesday 28 August at Sincil Bank, following the conclusion of the televised Lincoln City v Everton second round fixture.