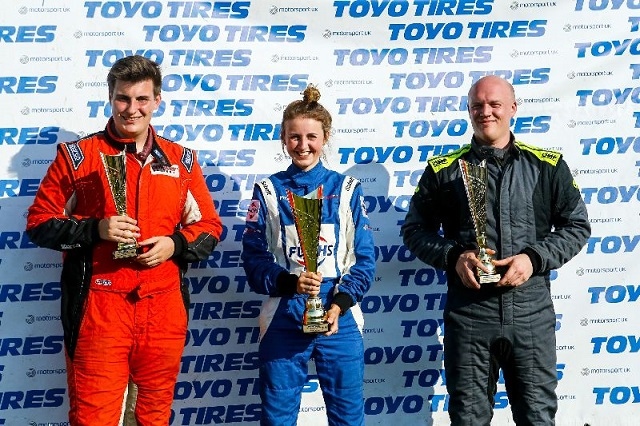 Brown was left with significant damage to his MINI after sustaining a heavy impact to the front suspension during a start-line shunt in the opening qualifying heat of the day.

The non-finish meant he was playing catch up for the remainder of the day, but returned a superb performance in the final to go one better than his round-four result, earning him second place on the winner’s rostrum.

Brown's result vaults him into third overall in the BMW MINI single-make standings and just eight points shy of second spot as the season enters the second half of the year with four rounds remaining.

The Rochdale based driver has made the full-time switch to the circuits in 2019 after previously contesting stage rallies in Europe behind the wheel of his familiar Nissan Micra Kit Car in the Flanders International Rally Challenge. Despite a difficult start to the season in the Bellerby Motorsport run BMW MINI, Brown has showed remarkable improvement and secured his maiden Rallycross podium at Pembrey before the summer break.

He would head into the south coast with a confidence boost, thanks to the Kent circuit being the first ‘repeat’ usage this season.

Brown has been forced to learn the part-gravel, part-asphalt tracks during the practice sessions for much of the year, but this marked the first time he would return to a circuit that had already been used, meaning he could put his previous experience to good use.

An impressive free practice pace would sadly be swept away from him on the very first qualifying heat as Brown was hit from the side on an unsettled starting grid. The damage was too significant to continue, and the Bellerby Motorsport Team faced a race against time to replace the front left suspension.

Thankfully, he made it out for the second session and a tentative run around the 1,200 metre course would ensure a suitable time was recorded. The final qualifying session allowed Brown to pick up the pace and although it would be a last place finish, it would be enough to ensure he made the final.

Lining up on the back of the grid would not be an ideal place to mount an attack on the lead, but Brown elected to use tactics to gain his advantage. The joker lap takes competitors through a different part of the circuit, re-joining at a set point and is to be used once during a race. Brown would use this opportunity perfectly and a clever use of the ‘joker’ lap early on vaulted him into second place.

There he stayed to secure a career best result and with team-mate Drew Bellerby landing top-spot, he gave the team a well-deserved one-two.

At the finish, Brown said: “It’s probably been the toughest weekend of motorsport I’ve had for a very long time and it was such a roller coaster of a day.

“Everything felt great after free practice and I was quite confident going into the qualifying sessions that I could secure a solid weekend and get some points on the board. Then all hell broke loose on the start and I was just taken out within a few hundred metres of the line. It was disappointing and gave the team a big job to repair it in time.

"Luckily, they did, and I just stayed well out the way for the rest of the day and did my own thing. That seemed to work and played perfectly into my hands in the final. It certainly made up for the morning’s drama.”

Round six sees a return to Pembrey in South Wales in just under a month’s time.