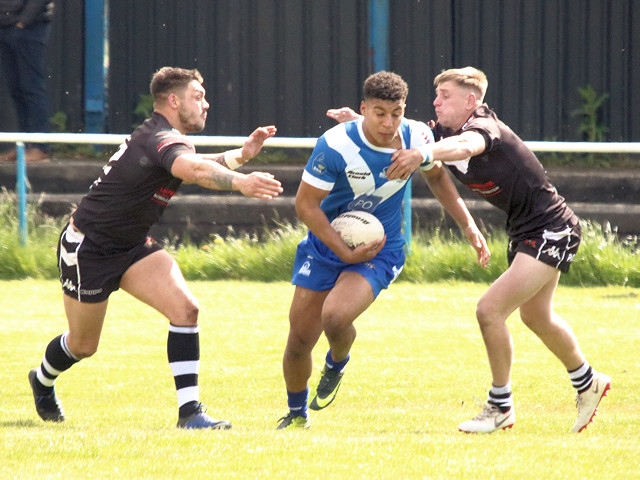 Mayfield gave their hopes of avoiding relegation a huge boost in Cumbria on Saturday 31 August as they ran in eight unanswered tries against a young Kells outfit.

Playing against the strong wind in the first half it only took two minutes for Sam Butterworth and Steve Woods' side to stamp their authority on the game. Direct running from the off saw them attack the line straight away and Luke Fowden crashed through the defence out wide to open the scoring.

In a very open game Jack McConnachie, and wingers Wayne Bannister and Munya Samanyanga went at the Kells line at every opportunity, causing havoc. Lewis Butterworth took advantage of this as he sprinted through a gap to extend the lead, Zac Hartley converted.

Mayfield looked ready for this game and began to throw the ball about, moving the Kells defence all over the pitch. With this type of rugby there will always be gaps and a great long ball from Butterworth put Wayne Bannister through to go in for his first score of the afternoon.

At 14 points down Kells could have gone under, but they deserve massive credit for the way their young lads rallied, coming back at Mayfield and getting a couple of repeat sets on the Mayfield line, but the away defence was rock solid on the day, hardly missing a tackle all game. Shaun Hurley and James Connaughton were busy all afternoon and helped set the platform from which this victory came. Mayfield pummelled their way off their own line and creative work from Cole Connolly and Wayne English saw them drive past the Kells 20 metre line.

A quick play the ball from Liam Whalley saw Dec Sheridan worm through for a great hookers try, Hartley popped over the conversion.

The half time break saw Butterworth rally his troops, stressing the fact that they could not let this game slip, and they responded brilliantly. A 60 metre Zac Hartley break in the first five minutes saw Sheridan feed the ball to Bannister who did the rest, Hartley again added the two.

The rest of the half belonged to Bannister who had the kind of day wingers dream about scoring another three tries making his total for the day five. Hartley added two more conversions to make the final score 42 - 0 to Mayfield.

This was a particularly pleasing result for the coaches as it was the first time this season they have kept a clean sheet which is a big positive at this critical stage for them.

There were good performances all round with few errors and good ball retention for the blustery conditions.

James McDaid continued his improvement with a top showing along with a similar outing for Lewis Butterworth. Wayne English steadied the ship when needed, while Bannister's five tries were a joy to watch, but the Kells coaching staff went for Declan Sheridan as Man of the Match for an 80 minute masterclass in hooker play.