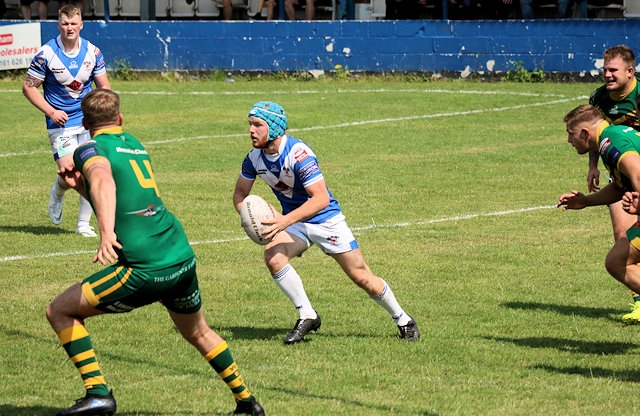 There were jubilant scenes at the Mayfield Sports Centre on Saturday (7 September) as Mayfield finally put their relegation worries to bed with a hard fought, well planned win over a very good Hunslet Club Parkside. The crowd was fantastic and got behind the home side, willing them on to victory.

Mayfield had a good start as the Hunslet full back carried the ball dead from the kick off. From the resulting drop out Mayfield applied pressure to the Hunslet line with Si Moore, Shaun Hurley and Luke Fowden leading the way pushed on by Dec Sheridan and Cole Connolly.

As usual, the visitor's defence was rock solid. Mayfield looked to match their defence as Hunslet took their first set in, but over enthusiasm saw them rush in and miss the tackle. This allowed the experienced Hunslet stand off the chance to send his winger away down the flank and he was unstoppable as he raced in from 40m out. The stand off then added a very good conversion, 0 - 6 with only four minutes on the clock.

Mayfield were rattled and proceeded to cough up two sets of possession, Hunslet attacked Mayfield at every chance and they were unlucky not to extend the lead as their big centre lost the ball over the line with Munya Samanyanga and Lewis Butterworth in the tackle.

This was the wake up call Mayfield needed and they clicked into gear playing skilful determined rugby. Playing like this they didnt look like a team trying to avoid the drop, they were more than equal to their high flying opponents.

Zac Hartley started to impose himself on the game and his team mates reaped the rewards. Lewis Butterworth exploded through a gap and headed toward the line and from the play Cole Connolly showed a touch of class to force his way through the defence for a great try, Hartley added the two points to level the scores, 6 - 6.

Mayfield were now playing by far the better rugby as Hartley, Ieuan Higgs and Jack Sampson combined they went close again only to be denied. Only needless penalties and lost possession stopped them taking the lead and instead they found themselves defending on their own line for three repeat sets. To their credit, the Mayfield defence took a leaf out of the Hunslet book and were superb, James McDaid, Rob Kershaw and Jack McConnachie put their bodies on the line time and again. Hunslet put the ball high on the last tackle and Mayfield didn't deal with it under pressure as the Hunslet centre fed his winger who went in for his second try, the stand off failed with the conversion, 6 - 10.

Hunslet were then awarded a penalty which, sensing a close game they chose to slot over for the two points, to make it 6 - 12.

With five minutes to go till half time the game was evenly balanced, the next score meant a lot and if it had gone Hunslet's way it could very well have been a different result, but again Sam Butterworth's lads dug in and good work from Ieuan Higgs saw him put Lewis Butterworth away for a try, converted by Hartley to level the scores again.

The half time break saw the Hunslet coach rally his side as he tried to give them what they needed to win this game. The restart saw them speed up their play and Mayfield struggled to keep them in check. Within minutes it took a superb try saver from Luke Fowden to stop them regaining the lead but it didnt last long as Mayfield again failed to deal with a high kick and the Hunslet winger pounced to complete his hat trick, the conversion made it 12 - 18.

Hunslet very nearly extended that lead when the winger again broke away with a five metre start but Sheridan caught him and just managed to force what must have been his big toe into touch. Again Mayfield fought back pressuring the Hunslet line in what had developed into a fantastic game of rugby with enterprising attack and brutal defence from both sides. Fowden was again involved as Mayfield drew level once more, making the break and slipping a brilliant pass to Munya Samanyanga who raced in, Hartley again added the two points. The game see-sawed back to Hunslet as they added another penalty to narrowly take the lead again 18  - 20.

The crowd feared the worst with minutes left on the clock and they roared their team on cheering everything Mayfield did but Hunslet snuffed out every attack and continued to pressure Mayfield. Higgs made a superb last gasp tackle to keep Mayfield in the game and when Sheridan picked up a loose ball and raced 60 metres for a season saving try the crowd went wild. It was one of the best moments at the club for many a year, Hartley cooly slotted over the two for 24 - 20.

With seven minutes added for stoppages this game was far from over as Hunslet threw everything at Mayfield in an attempt to take the points but Mayfield were more than equal to the task and another try saving tackle from Lewis Butterworth ensured that the home side kept the lead and sealed the win in what was an absolute cracker of a game from the two sides involved.

This game had everything, superb tries from both sides and equally superb defence. The Mayfield pack were awesome on the day; Hurley, Moore, Taylor all played brilliantly and especially Fowden whose work rate was phenomenal. The backs too put in their best performance of the season; Samson never put a foot wrong while McDaid and Butterworth were strong and composed in the centres and Connolly and Sheridan were their equals in the middle.

The Hunslet coaches gave the man of the match award to Zac Hartley whose kicking game, including two excellent 40/20s was faultless.