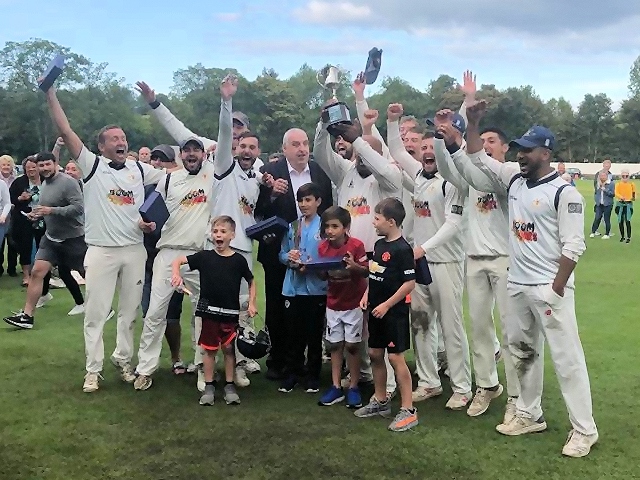 Norden Cricket Club are the champions of the county after defeating Darwen in the final of the Lancashire Cricket Foundation knockout at Heywood Cricket Club’s Crimble ground on Sunday (8 September).

Norden totalled 146-7 then dismissed the trophy holders for 55. On paper that looks an easy win, but not so as they had to graft hard to reach their total on a wicket which was hardly in favour of run scoring.

Add the fact that an outfield still damp in places meant only seven fours were scored in the whole of the match, the ball holding up just short of the line several times.

This was a team performance by Norden in every sense of the word, but three players stood out.

Joe Humphreys, youngest player in the team, bagged 42 runs to become the highest run scorer in the match, and many at the ground felt he had done more than enough to be named man of the match.

But then came two more contenders. Jake Sandham blew away three top batsmen before Hashum Malik destroyed the middle order with his four for 14.

Adjudicator Clinton Perren went for Malik who was one of only three survivors from the team beaten in the 2014 final by Ormskirk.

Overall there were many good performances. Josh Tolley and Harvey Fitton nudged and nurdled and hit out when they could to put on 55 before Fitton was given out leg before to John Cordingley in the 21st over.

Twenty-one more runs were added before Tolley hit to mid-off to be caught by Scott Jackson.

Joe Humphreys then built on the good start, but Norden lost Jake Sandham for 7, bowled by Niall Burke, and Saif Bhojani for a duck which put Cordingley in with a hat-trick chance which Greg Butterworth survived.

Only seven overs were left of the innings when Butterworth attempted to sweep and was bowled by Cordingley to make it 118 for five.

Humphreys knock finally ended with the total on 129 when he skied a delivery from Kamran Anwar to be caught by Cordingley on the drop.

Runs were needed and they came from a mini partnership between Lee Crabtree (16) and Dominic Humphreys (5 not out), Crabtree falling from the last delivery of the 45 overs, caught by Cordingley.

Had Norden got enough? There were many doubters, but the locals felt it would be more than enough.

The reply opened with Ammer Mirza quickly looking for runs, but with 10 the total, he was trapped leg before by Jake Sandham who, at times, in his six overs looked very rapid.

Four runs later Sandham beat Scott Friend on pace, and without addition Scott Jackson was leg before to the Norden professional.

The top order had been blown away, and the middle order soon followed.

John Cordingley and Jordan Clarke tried to repair the damage for Darwen, but it became 22-4 when Malik hit the sticks to dismiss the former.

Clarke soon followed, leg before to Chris Humphreys, and at 22-5 the trophy appeared ready to be presented.

David Bowden did offer some resistance before having his stumps wrecked by a Malik delivery, and Greg Butterworth got into the act when he trapped Anwar's leg before.

Mark Friend did his best to give the score some respectability and finished unbeaten on 18, but his three remaining partners didn’t score a run between them.

Niall Burke smacked a Malik delivery into the hands of Steve Pimm at backward point, Chris Wade was caught in the slips by Dominic Humphreys, and the end came when Andrew Cook was bowled by Greg Butterworth.

The trophies were dished out by Clinton Perren and John Murphy of the Lancashire Cricket Foundation, with John Gwynne providing a commentary on proceedings.