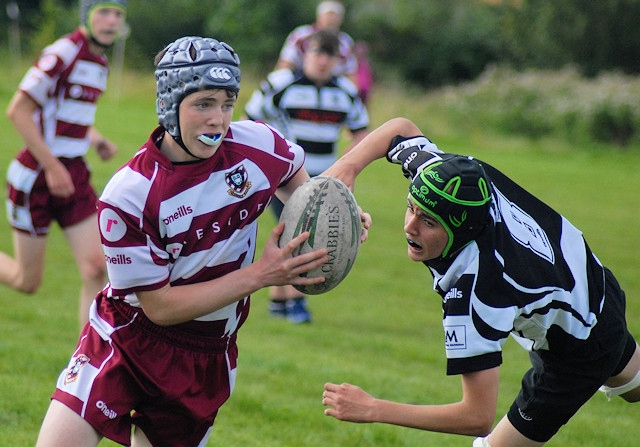 Holt stepping in for the try

After last week’s training game saw Rochdale score ten tries and concede four against Bury, the lads were looking forward to their first 60-minute match of the season at Broughton Park on Sunday 8 September.

Unfortunately, the home side could only raise 13 players so it was agreed to play a training game of 13 aside, split into four quarters.

Rochdale had some sustained pressure early on and got on top of the match. However, despite the majority of territory and possession, the first quarter ended with a solitary Rochdale try for Mitch Holt after a great carry from Kai Potter. With the conversion, the quarter finished 0-7 in Rochdale’s favour.

The second quarter was a more even affair with Broughton Park now getting some ball and being able to release their backs, who found the outside channels all too often and got in behind Rochdale. Rochdale’s defence is much improved and the players were repelling all that Park could throw at them.

Unfortunately, in one such attack, the Rochdale back row Charlie Bleackley was involved in a heavy collision which resulted in a suspected broken wrist (later confirmed as a double break and dislocation). This resulted in an unavoidable delay for the necessary medical attention and on recommencement the Rochdale lads were understandably distracted by the unfolding events.

The third quarter saw Broughton Park come to life, with the speed and accuracy of their handling now finding space for their quick runners. In the space of five minutes they had scored two converted tries. This galvanised Rochdale and they subsequently scored two quick tries of their own. The first, a break off the scrum by Garrett Myers saw him break the first tackle and sprint 30 metres to the line. The second, a well-constructed try from the restart with Ben Kershaw fielding the kick and moving the ball to the blind side, feeding Myers who drew the winger and put James O'Connell away down the wing.

The return pass put Myers away on the inside for another try. Rochdale were again getting on top, but a lack of concentration after a dropped ball saw the Broughton centre scoop up the ball and sprint to the try line.

Rochdale started the fourth quarter just behind on the score board but soon regained the initiative with some more excellent running and handling, Tom Drennan had a strong run down the left and, with the defence in retreat, Will Simmons ran an arcing line past the centres and straightened for the line. Rochdale were in attack mode now and, after an error fielding the ball by the Broughton fullback was compounded by a wayward kick, the ball was fielded by Holt who unselfishly fed Ben Sunderland to score under the sticks to end the game. Final score 33-21 to Rochdale.

Man of the Match was awarded to Kai Potter for some great ball carrying. This was a good run out for the team with some good individual performances combined with excellent team work but the game was marred by the injury to Charlie and his teammates, coaches and players parents wish him a speedy recovery.