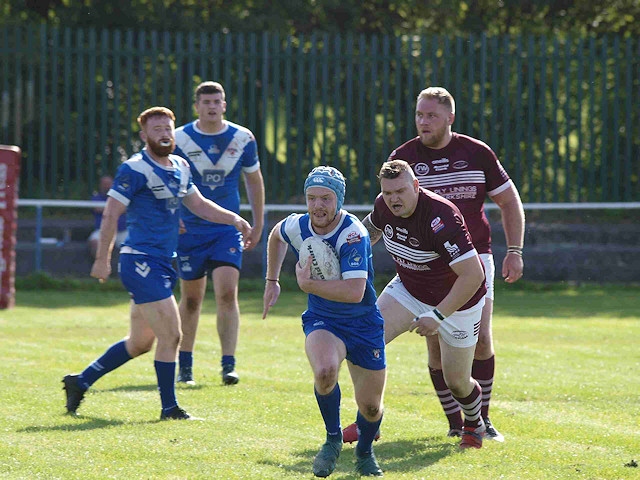 Dec Lawlor imposing himself on the game

Mayfield brought the curtain down on their season with a fine win on Saturday (14 September).

Right from the whistle this result was never in doubt as Mayfield came out of the blocks with all guns blazing. Liam Whalley opened the scoring, with a fine effort, with just two minutes on the clock converted by Zac Hartley, 6 - 0.

A penalty for offside at the restart allowed Mayfield the chance to get straight back at the line, which they accepted with style. The ever-improving Ieuan Higgs providing Wayne English with the second try, again converted by Hartley, 12 - 0. Mayfield then had a little hiccup as they gave away a couple of penalties and the big Thornhill number 12 crashed through to narrow the gap.

It was never going to be enough though as the Mayfield side playing with confidence and flair, without the spectre of relegation hanging over them for the first time in months. English was again superb at the back, rock solid in defence, and eager to get involved when his side were going forward.

The other lads thrived off confidence and the rest of the first half, they played some great rugby with Lewis Butterworth, and Higgs, the second a stunning 70m effort, adding to the score line Hartley added another two conversions to give the home side a 28 - 6 half time lead.

Higgs, Hartley and Cole Connolly worked well together in the middle of the park with at least two of them involved in almost everything Mayfield did.

The first ten minutes of the second half saw Mayfield lose their shape and their concentration, but the experience of English and Rob Kershaw saw to it that they soon got back to the game plan.

When they did, they looked just as good as the first half with Dec Lawlor now imposing himself on the game and causing problems for the opposition every time, he touched the ball.

He got the first try off the second half and soon the team were back on track. Thornhill managed another score, but Jack Sampson, Butterworth Andy Taylor all added Mayfield tries before John Foy rounded off the scoring right at the death, final score, Mayfield 58 Thornhill 10.

Again, the Mayfield forwards were strong with Shaun Hurley, Luke Fowden, Whalley and Jack McConnachie all putting in good shifts. The backs though were equally impressive with Munya Samanyanga, Butterworth and Higgs all superb.

The Man of the Match award went to Lawlor, who showed again that with a structured kicking game, and the ability and confidence to take on the opposition, the game is easier.