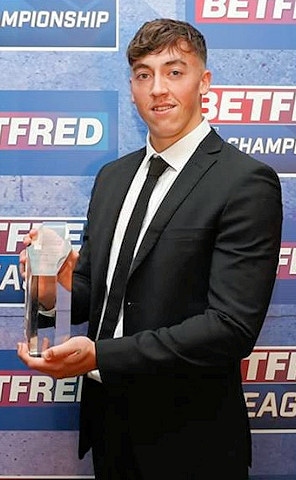 Matty Ashton with his award

Former Rochdale Mayfield player Matty Ashton has been named as the Betfred Championship Young Player of the Year.

The 21-year-old winger, who currently plays for Swinton Lions RLFC, scored 30 tries in 24 league games in his debut season for the side.

Speaking on social media, Ashton said: “This has topped off a very special 2019 for me. The hard work doesn’t stop, and I’ll continue to chase that dream.”

A spokesperson from Mayfield added: “Well done to former Mayfield player Matty Ashton for winning Championship Young Player of the Year Award. It is absolutely well deserved, and everyone at the club is so proud of him.”

Ashton played junior rugby at Mayfield under the tutelage of Dean Hartley and Marvin Connolly up to under 16 level. He was trained by Matt Calland (now Rochdale Hornets’ head coach) at under 18’s level before making his debut in the Mayfield open age side.

After two seasons with the Mayfield NCL side, Ashton decided to try his luck in Australia and had a successful season with the Mullumbimby Giants team in New South Wales before returning to the UK to sign for Swinton at the beginning of last season.

Ashton signed to Super League team Warrington Wolves in August, who he will join for the 2020 season.