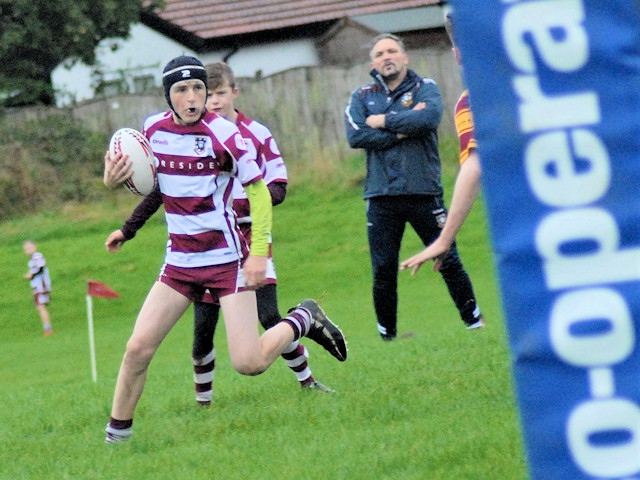 Recent games have gone Rochdale’s way and this one followed a similar pattern, with Rochdale dominating territory and Sedgley relying on broken field situations and attacking from deep. Rochdale chose to play against the slope and breeze in the first half and were successfully maintaining possession and making the hard yards, denying the Sedgley speedsters out wide the opportunity to thrive. Just when this seemed to be working, the Sedgley centre with gas to burn found a kink in the defensive line and sprinted 30 metres to score. The conversion was missed.

This did not upset Rochdale and they persisted with strong running forwards and camped in the Sedgley 22. After a good kick and chase, the Rochdale defence forced an error and Will Simmons was the beneficiary, scooping up a loose pass to dive over the line. The conversion was missed (5-5).

Rochdale were again enjoying the better of the close quarter combat and moved into the opposition 22 once more. After some sustained pressure, Rochdale were awarded a 5 metre scrum. The ball was cleanly struck to the number eight’s feet and, with a slight wheel infield, Ben Sunderland was able to pick up and drive through the opposing scrum half and number ten to wrestle over the line. The conversion was successful taking the score to 12-5.

Rochdale were again on the attack but the Sedgley backs do not need much ball to notch up a score. From a tap penalty in their own 22, the ball reached the speedy centre who again was able to find the smallest of gaps to squeeze through and accelerated away for an 80 metre try. The conversion was successful and that concluded the first half scoring, 12-12.

Rochdale had the majority of territory and possession but a couple of defensive blips had kept Sedgley in the game. The second half followed a similar trend with Rochdale camped in the Sedgley 22 for long periods and Sedgley defending as if their lives depended on it - especially their captain on the flank who put in a tackling master class. It was inevitable that Rochdale would eventually score again and, after having a couple of tries chalked off for forward passes, Nick Wright crashed over for what was to be the decisive score. The conversion was missed (17-12).

Sedgley did have a couple of long-range forays into the Rochdale half but the defence had tightened and the speedsters were finally kept at bay. After more pressure and some collective indiscipline, Rochdale were awarded a very kickable penalty from in front of the Sedgley post. Billy Pirouzan the 'new' Rochdale hooker/winger coolly converted to give Rochdale the insurance of an 8-point lead (20-12). The game finished with Rochdale again camped on the Sedgley line.

Coach Sean Sunderland said:" It was a really well executed game. Special mention to Charlie Roach and Tom Shaw, our new recruits who both showed the commitment and desire to get stuck-in in a physical and fast paced game.

"It was really difficult to choose the man of the match; Taylor Hartley, Nick Wright and Garrett Myers carried fantastically well aided by Matt Dearden's service, Simmons and James Tasker were great in the centre and clearing rucks, Sunderland was awesome at the break downs ably supported by Bendan Hankinson, Tom Drennan and Brad Rowley. Mitchell Holt’s kicking game drove his forwards down field. Billy Pirouzan, Ben Kershaw and Sicknote Pendlebury all looked sharp in both attack and defence. Add to that Joel Rigby, Sonny Joyce and Bendan Hankinson having their best games so far this season. The honour went to Will Simmons for his tremendous work at the break down and in defence."