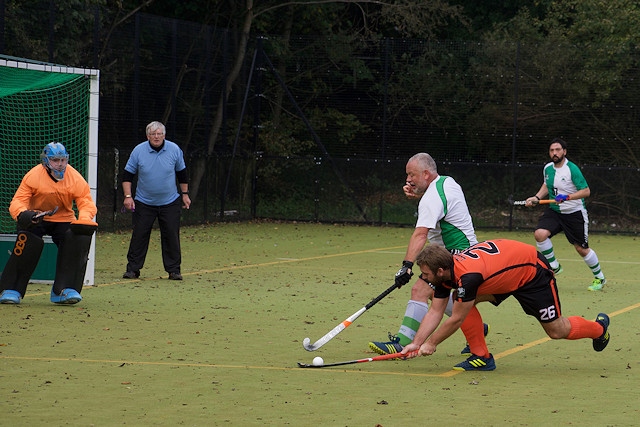 Rochdale started brightly and played some good hockey going forward earning a few half chances, but the game flowed from end to end with Lancaster attacking mainly from counters and struggling to break Rochdale's high press on the Lancaster 16 metre line.

This led to Rochdale's first goal. After coming close from a penalty corner, the press was quickly set up and an interception was made near Lancaster's top D which led to a goal from Rochdale's vice captain Dean Close.

Rochdale then managed to take the sting out of Lancaster's play, but a change of attacking style allowed a deflected goal following a Lancaster overload down Rochdale's left wing.

Unfortunately for Rochdale another goal followed for Lancaster from another overload down Rochdale's left wing, as a crowded D left Rochdale keeper Jimmy Deacy unsighted and a powerful reverse stick strike gave Lancaster a 2-1 lead at half time.

Rochdale largely dominated the second half possession and probably created the better of the chances. One of these was expertly by Adam Massey as he received the ball at top D, turned the defender and smashed it into the bottom corner to even the score.

Rochdale kept pressing to get the win as it looked more likely they would but couldn't find the breakthrough. Lancaster, though began to show the odd warning sign on the counter and managed to again score with another first time deflection.

Rochdale kept pushing, but unfortunately frustration boiled over after a few clashes and sadly Rochdale were reduced to 9 men for the last 10 minutes. Lancaster were also reduced to 10 men after their umpire spotted an elbow in the back of Rochdale striker, Kane Morgan.

It was a bad end to what had been a good game that Rochdale were unlucky not to take some points from. Everybody worked really hard and it was a close match that could have gone either way.

The Flying Horse man of the match went to Dave Marlow.