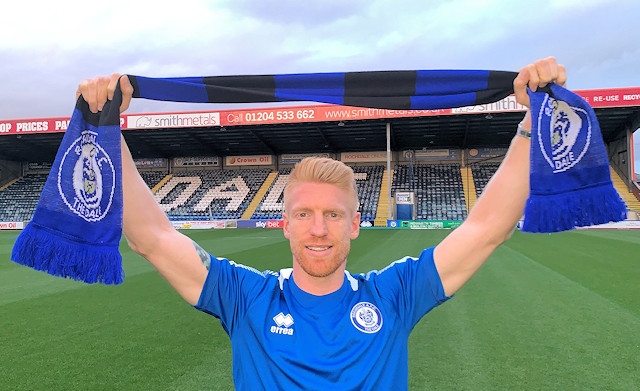 Rochdale will face National League Northern side Boston United in the second round of the FA Cup after a narrow victory over Wrexham in their first round replay. Paul McShane’s eighth minute header was enough to overcome the side from North Wales.

With a home tie against sixth tier Boston United the prize, both sides went with their strongest available lineups. Brian Barry-Murphy made two changes from the weekend; Paul McShane returned from injury whilst Fabio Tavares was preferred up front.

Dale took the lead with their first real chance; Aaron Morley’s right wing corner was flicked on by Rekeil Pyke to McShane who powered his header past Rob Lainton.

Wrexham responded well to going behind and came close to levelling three minutes later. Mark Carrington got down the right with his cross flicked towards the back post; Ben Tollitt sliding in inches away from connecting.

Matty Done, in his 500th career appearance, warmed the hands of Lainton with a powerful strike after being found by Tavares.

Robert Sanchez was called into action shortly before the interval; Luke Summerfield’s dipping shot was well saved by the Spaniard as he pushed the ball out for a corner.

The second half saw Wrexham pressure their league hosts but couldn’t find a way through. A long punt from Lainton was helped on by former Dale striker Bobby Grant to Shaun Pearson who’s half volley went narrowly wide.

Dean Keates’s side piled on the pressure in the latter stages and will feel they should have levelled when Grant volleyed wide when he should have hit the target.

It wasn’t the prettiest of performances but a second round tie beckons for Barry-Murphy’s side.

The second round game against Boston United will be on Sunday 1 December at the Crown Oil Arena, 2pm kick off.