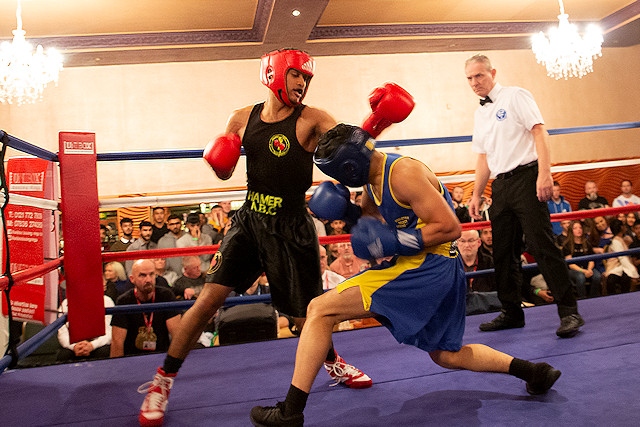 Hamer Amateur Boxing Club’s annual November boxing show was a smash hit again this year with another display in front of a sold-out crowd at Richmond Hall, Rochdale.

Nine Hamer boxers stepped into the ring; the first to step into the ring was Kieren McManamy, 13, who met Decon Kenway, of Droylsden ABC, for a skills bout.

The young Hamer hopeful stepped out of the red corner for the very first time, yet he showed no fear as he constantly kept his opponent on his back foot with his swift jab to both the body and head.

In round two, both boxers could use their one-two combinations – the jab and their rear hand power-punch. On the sound of the bell, Kieren continued to dominate the bout, so much so that the referee had to momentarily step between both boxers to ask Kieren to refrain from using his power, such was the force of his punches.

In the third and last round, both boxers were allowed to use any combination of punches and it was in this round that Kieren showed his full potential when he constantly forced Kenway back onto the ropes to unload punches to both the body and head.

In the end, the crowd showed their appreciation as both boxers had their arms held up.

In bout number two, Austin "Powers" Heneghan, 11, stepped into the ring to meet Jay Jay Butler, of Legions Gym.  As soon as the bell rang, the Hamer youngster steamed out of his corner to land a solid right-hand punch to the head.

Heneghan continued to take the fight to his opponent, yet Butler showed great commitment with his continuous approach towards the Hamer youth. It was here that Austin switched tactics to stand on his back foot and wait for Butler to approach, which he did, only to be met by a solid right hand to the head.

In round two, both boxers gained success when unloading their punches. They also showed ability way beyond their age. Ultimately, it was the Hamer youth who was the one who gained the judges’ attention.

In the third and last round, Austin stayed composed as both boxers continued to land punches upon each other in what was a highly entertaining bout; in the end, the Hamer youngster had his arm raised in victory with a unanimous decision.

Next to step into the ring was "Champagne" Charlie Braddock, 12, who met Tyree Holden, of Accrington Lions, in a very close, all-action contest that saw both boxers throw non-stop punches upon each other which led to a split decision in Holden's favour.

The fourth Hamer boxer to step into the ring was Louis "One One Eight" Humphreys, 14, who met Joe Smith, of Littleborough Boxing Club.

Humphreys stepped out for the first round using neat footwork with a long-range jab and power-punch which constantly peppered his opponent, when an old shoulder injury reappeared, which immediately slowed him.

He began to struggle to off-load his punches, which allowed Smith to begin to force the action just before the end of the round. On telling his coach, Louis was asked if he wanted to pull-out of the contest, but he refused and said he would go on.

The bell rang for the second round; Louis came out using his footwork again to stay out of range whilst landing his jab. However, because of his injured right shoulder, he couldn't throw his right hand with any power.

All he could do was stay upon the ropes and allow Smith to unload unanswered punches upon him and the referee stepped in to give the Hamer lad a standing eight count before the bell rang to end the round.

The Hamer youngster was asked once again if he wanted to end the contest but instead, he stepped out for the third and final round, only to be met by a barrage of unanswered punches.

The referee had seen enough, and he wisely led the Hamer youngster back to his corner in favour of Smith.

After two defeats in a row, the next Hamer boxer to step into the ring was Owen "The Storm" Webster, 15, in his debut contest for the Rochdale club, meeting Sonny Heneghan, of Stubby's Boxing Club.

When the first bell rang, Webster stormed out with a whirlwind of punches that forced the referee to step in and administer Heneghan a standing eight count.

The bout began again, and Webster immediately landed two solid right-hand punches to his opponent's jaw. Heneghan stepped back onto the ropes, only to be met by a combination of hurtful punches which forced the referee to step in and call an end to the onslaught in favour of the Hamer boxer.

As soon as the cheering calmed down, the volume within the room rose again during the sixth fight when Aman "Any Boy Can" Hafeez, 17, and Sam Thornton, of Eastburn ABC, clashed in the middle of the ring.

Both boxers unloaded punch after punch upon each other in a terrific brawl. Rounds two and three were much the same as both boxers stood toe-to-toe throwing and connecting with powerful punches upon each other.

As the last round began to fade, it was Aman who looked to be coming on the stronger, but when the bell rang, it was Thornton who had his arm raised in victory by a split decision.

Next up was Faisal "The Look" Khan, facing Kyle Ham, of Middleton Select Boxing Club.

Both boxers tried to emulate the previous contest with non-stop action. Ham took to the centre of the ring whilst Khan used footwork to box on the perimeter as he used his jab before storming in with hooks to both the body and head.

In round two, Faisal continued to use his footwork and land quick combinations before stepping back out of range.  As the round progressed, Kyle began to tire and his attacks became less frequent, allowing Faisal more hurtful punches to both the body and head.

In the third round, Kyle seemed to find new energy and he stormed out after his opponent with his head down whilst throwing punches. Although he was constantly reprimanded by the referee, Faisal began to land scintillating uppercuts to the jaw to take a unanimous decision in his favour.

The eighth Hamer boxer to step into the ring that night for his first contest was Arslan "Lightning Strike" Shoukat, 18, meeting Zack Pearson, of Larches and Savick Boxing Club.

The first round was a tactical affair with Pearson constantly stepping forward in a low crouch whilst looking to land power punches, whereas Arslan used neat footwork and a long-ranged, fast jab to keep his opponent at bay.

In the second round Arslan began to land solid right-hand punches to the jaw before stepping out of range. This continued throughout the round with the Hamer lad gaining the most success.

At the start of the third and last round, Arslan landed a scintillating right-hand to the jaw and Pearson fell to the floor, only to jump straight back up again.

The referee administered a standing eight count before allowing the action to continue. The crowd waited for Arslan to have his arm raised to gain his first victory, but the contest was awarded to Pearson by a split decision.

The last Hamer boxer to step into the ring that eventful evening was Monir "Real Money" Miah, 18, who met Lucus France, of Workout Boxing Academy.

Monir came out using his footwork and an effective jab before unloading a barrage of punches, which delighted the crowd.

The Hamer boxer continued to use the ring in an uneventful round which was won by Monir's jab.

As soon as the bell rang, Monir set about with solid combinations in a closely-fought and tactical battle of skills. In the third and last round, Monir continued to jab his opponent before stepping out of range.

When Lucus came towards him, he was continuously met by right-hand punches to the jaw, which gave Monir victory by a majority decision.