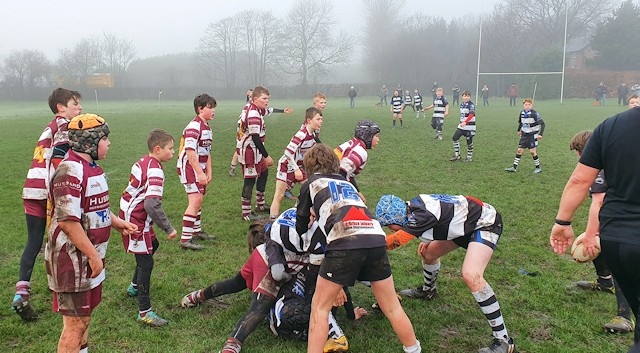 With the pitches at Rochdale being frozen, this game was switched to Trafford where the pitches were playable and the teams lined up for a cold foggy Sunday morning's rugby.

Trafford were caught napping from the off and Rochdale took swift advantage. Some power play from the forwards saw Jethro Richards steamroller through the middle, and having been brought down just short of the line, James Richardson was in a great supporting position to gather the offload and register an early try 1-0.

From the restart Rochdale chased the ball down quickly and immediately resumed the pressure on the Trafford pack. Jonty Whitehead was doing sterling work turning the ball over and with Sam Bowers delivering quality ball out to the three quarters, a lovely interplay between Alfie White and Jake Johnson created the necessary space. The ball was offloaded to Finn Johnson who showed great upper body strength to break 3 tackles and cross the line to make it 2-0.

Rochdale's next score was a fantastic team based try. From the near touchline, Isaac Corns and Jethro Richards dug the ball out of a maul. The ball flew down the line, each pass crossing the gain line handsomely. As the ball reached the far touchline it was held up briefly before Whitehead and Max Evans engineered a quick recycle via Bowers. Back down the line it came, sidesteps from the Johnson brothers and Noah Wilde continued the march downfield, to Corns, to Richards and a final pass back out to Adam Sanderson who made no mistake to cross the line for 3-0.

Trafford looked a little stunned, and from the restart a handling error from them saw Max Rawlinson fling himself on the ball. With Hari Ghattaura protecting the ball, the ball was flung to a grateful Mike Bennett who powered over to score, 4-0.

As halftime approached Rochdale continued to apply relentless pressure and Trafford were unable to clear their line. Casey Brooks was cutting off any chance of a break round the outside and as a maul turned into a ruck, the ball popped out of the mangle of players on the Trafford side. As the ball rolled away backwards over the Trafford try line, Jake Johnson was quickest to react and hared round the side of the players to dive on the ball and register an opportunistic try to take Rochdale into the interval 5-0 ahead.

A different look Trafford side emerged in the second half, and for about 10-15 minutes there was an battle of attrition in the midfield as play went one way then the other. Sanderson had been replaced by Will Brown and he was doing well to disrupt clean ball and make it hard for Trafford's players to gain any momentum. Time and again tackles went in, but cracks appeared and allowed Trafford's powerful lads to finally break the line. Eventually the defensive wall failed and Trafford crossed the line to claw back a point 5-1.

The Rochdale squad re-focused and the rhythm and understanding of the first half returned. The tireless work from the forwards allowed Rochdale to regain momentum as Evans, Rawlinson and Whitehead enjoyed great success in ripping possession of the ball back regularly. With the three quarters line holding their positions well, Trafford found themselves exposed in the middle and a trademark Ghattaura power pummel saw him cross for a well-deserved try, 6-1.

The clock was ticking down and when Corns and Richards rucked over the ball for Rochdale, the Johnson brothers and Rawlinson dragged the Trafford backs out of position. Alfie White was the recipient of a well delivered pass and he dived over the line to get his own name on the score-sheet and finish the game 7-1.

After the game, Rochdale's coach said: "All the boys played with enormous flair and gusto, and Trafford were exceptional hosts. It was nice to have a game of competitive rugby after so many cancellations – next week the tests away to Burnley and at home to Fylde will bring fresh challenges so time to enjoy the day, and build on the many positives."