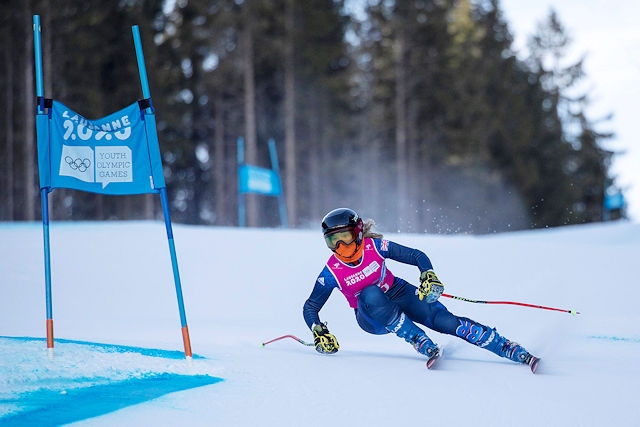 The former Beech House pupil, 17, of Whitworth, was one of 28 athletes aged between 14 and 17 years of age taking part for Team GB in 11 of the 16 disciplines on the programme across 14 days of competition between 9 – 22 January.

Daisi also competed in the women’s giant slalom and slalom where she registered two DNF’s [Did Not Finish].

Speaking after the competition, Daisi said: “My performance throughout the week was definitely pretty decent compared to the rest of my season so far. I was really happy with how I skied in the Super G. I really hoped in the Super G that I could have broken into the top 15 as I came down – I skied into 13th in the first run which I was really happy with. Most of the time I felt fairly quick, but I could have been faster across all the disciplines – I tried my best.

“Most of the slalom I was quite cautious, and I could have given more, but then again I’m mostly happy with how things have gone. In the GS and slalom, I wanted to make the flip, considering how many good skiers there were in the field, but sadly I didn’t quite make it.

“The Youth Olympic experience has been so incredible – there hasn’t really been much more that I could have asked for from it – it’s been a dream come true. I’ve learnt that I’m quite open to meeting new people – I’ve made a lot of new friends this week and it’s been a great experience as a whole.”

The competition was Daisi’s second Olympic selection, following representation for Team GB at the European Youth Olympic Festival in Sarajevo in February 2019.