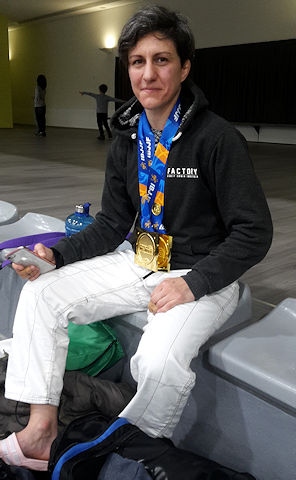 Competing in the IBJJF European Championships in Lisbon, Sophie battled to gold in the Master 2 Featherweight category. She then went on to clinch an even more impressive gold in the open weight division.

Sophie said: “This is a really exciting top-quality event attracting successful fighters from the leading European clubs over its four days. My work as lead coach for the Regional England Development Squad and my family commitments with my two young children necessarily restrict the time available for training and competition.

“Challenging myself to compete at featherweight posed a bit of a problem. In jiu jitsu, unlike judo, you weigh in in your suit. I’m glad I arrived early for the event because I was still a little way from making the weight. I jokingly remarked to my Factory BJJ club colleague Krishna Chauhan – European bronze medallist and my coach for the day – that my belt was heavy. He produced a ‘mega lightweight pro competition’ belt from his promotional stall for Fighters Market. That did the trick, and once I had clipped my toenails to conform to the eagle-eyed official’s stricture, I could finally prepare mentally for the intensity of the competition.”

First up was Brigitte Mondaca (Frontline Academy). A well-executed leg trip gained Sophie a quick two-point take down and she was able to dominate from then on and won by ten points.

In the final Sophie came up against a really proficient, technically experienced opponent in Yasisca Pujois (Lead BJJ). Once again, her judo expertise got the two point take down score with another leg trip. Sophie decided against risky attempts to increase the score and opted to grind out a victory from a dominant position.

Sophie continued: “It was great to see a really challenging entry for the open weight division with gold medal winners from light, middle and heavyweights competing.  Here I benefitted from the expert technical sessions the chief coach at BJJ Factory, Adam Adshead, had provided - as well as on the spot support from Krishna.

“I was pleased to be able to demonstrate a variety of techniques to win my three fights and secure my second gold medal of the day. Two armlocks for submissions took me into the final against Aashild Traedal (Ares BJJ Norway). This proved to be a fast moving, entertaining battle which I finally won with a shoulder choke submission. ‘Really vicious,’ as Aashild said afterwards!”