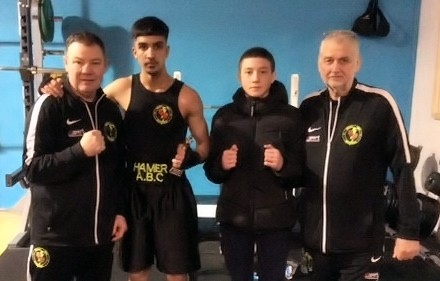 On Saturday 15 February Hamer Boxing Club travelled to Trident Fitness Centre in Leeds with two boxers after receiving a last-minute plea from Dewsbury Boxing Club who had two late pull-outs.

The first Hamer boxer to step into the ring was 15-year-old Owen “The Storm” Webster who met Zeeshan Suleman.

The bell rang for the first round and the Dewsbury boxer immediately came out and began taking the fight to Webster with brute force and powerful punches which forced the Hamer boxer to totally ignore his game plan. Instead of working off his jab and counter-punching his opponent, the Rochdale boxer began to trade solid blows with Suleman and to the delight of the boisterous crowd, both boxers stood in the middle of the ring trading heavy punches upon each other.

In the second round Suleman continued to step forward whereas Webster settled down with his counter-punching when the Dewsbury boxer stormed in. It was at this point that Owen realised that every time Suleman rushed in, he held his head down, so Webster began to use an effective uppercut which instantly shot his opponents head back up into the air, then Webster began to land more combination punches off the upper-cut to take the round.

Going into the third and last round both boxers showed signs of tiredness due to the intensity of the bout, but Suleman was inspired by his crowd of supporters which pushed him that little bit more and it was the Dewsbury boxer who was named as the winner after a very close split-decision.

18-year-old Arslan “Lightning Strike” Shoukat had to wait until after the interval before he could step into the ring, but he was determined to quieten down the crowd and take control of his Dewsbury opponent Soban Quasir.

The Hamer camp expected Quasir to follow the same approach as his team mate Zeeshan Suleman, and come out rushing at the Hamer boxer with solid punches, so Arslan was told to use his jab to keep his distance, then as Quasir stormed in he was to step back onto his back foot and unload his power-punch.

The bell rang for the first round and the boisterous crowd instantly raised the roof when the tall rangy Dewsbury boxer did exactly what the Hamer team expected, and he immediately rushed into the action with his long arms whilst unloading punches.  Arslan took it all in his stride and waited for his moment to pounce and as soon as Quasir dropped his left hand, the Hamer boxer unloaded a powerful right hand to the chin which instantly stunned his opponent. Arslan then landed a jab to the body, followed by a swift lead left hook to the head, which jolted Quasir down to his toes and Arslan immediately followed up with two more right hand punches to the face. Quasir rushed the Rochdale boxer onto the ropes but Arslan used neat footwork to move out of range.

Towards the end of the round both boxers stood off each other in the middle of the ring whilst they traded jabs, then Arslan landed another solid right hand to the chin to take the round.

Surprisingly both boxers began round two by using their jabs whilst staying out of range, which gave Arslan ample time to react to everything Quasir threw at him and every time the Dewsbury boxer attempted to throw a punch, it was met by fast combinations to both the body and head from the Hamer boxer and Arslan followed this up with a swift lead left hook to the chin to take the round more convincingly than the first.

The crowd cheered Quasir on in the third and last round and he began to take the fight to the Hamer boxer much more by forcing him onto the ropes to unload power punches which caught Arslan. The Rochdale boxer threw a right hand and lead left hook, which both missed and Quasir followed up with a solid right hand to the face which delighted his crowd, who were now upon their feet. From there on the bout became a little bit scrappy as both boxers began to feel the pace and when the bell finally rang to end the round it was the Hamer boxer Arslan who had his arm raised in victory by split-decision.

Hamer coach Steven Connellan said “Both bouts where very close contests which entertained the crowd. It was a great learning experience for both boxers as they continue their progression within this sport.”