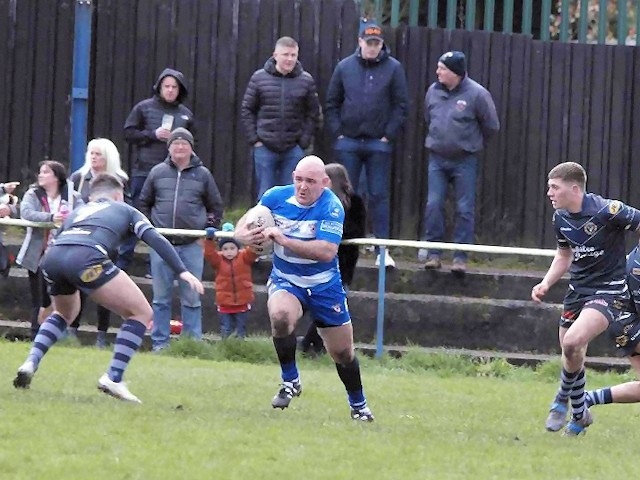 Mayfield came out second best at Leeds on Saturday (14 March) as they were well beaten by a tough, uncompromising Hunslet side. Sam Butterworth's side made a strong start after Cole Connolly's kick off found touch giving his side possession from the scrum.

Mayfield were unlucky not to be on the scoreboard in the first few minutes as they were held up over the line, the first of six unsuccessful attempts to ground the ball. They continued to apply the pressure and played some good rugby in the process but the defences were on top for the first thirty minutes with some bone crunching tackles going in.

It was Mayfield's indiscipline that lead to the first try as needless penalties in poor positions allowed Hunslet the chance to open the scoring after successive penalties gave them the opportunity to crash over for a converted try, 6 - 0.

Mayfield pushed back and looked good but they failed to stick to their game plan, although Chris Hough tried as hard as he could to remedy this. Cole Connolly continued to show his how much he is maturing as he assisted  Hough and Liam Donnelly in trying to create the breaks.

Both teams contributed to a game which was a credit to the NCL with tough uncompromising rugby and strong running and just before half time, a brilliant kick through from the Hunslet stand off caught Mayfield cold as they missed three tackles and the home centre touched down for an unexpected converted try 12 - 0.

Butterworth tried to instil in his side the need to stick to the plan with ball in hand during the half time break.

The side tried hard but after being held up over the line twice in the first ten minutes of the second half the writing was on the wall. A speculative high kick caught the Mayfield defence out as the Hunslet winger plucked it out of the air to go over unchallenged, 16 - 0.

Mayfield then showed their fighting spirit as they produced their best spell of the game which culminated in a great try for Aidan Gleeson who finished a flowing passage of play, Connolly converted, 16 - 6.

Mayfield pushed hard for another score but the Hunslet defence was superb and they were again held up over the line. With five minutes to go and against the run of play Hunslet broke from the Mayfield half and managed to seal the game with the final score, 22 - 6.

Again Mayfield went at the Hunslet line but again they were held at bay. Hunslet were deserved winners of this game but Mayfield showed again that they have enough there to be competing against these top teams.

Mayfield were over the line six times and only prevented from scoring by strong defensive efforts from the home side. At other times they also squandered try scoring opportunities through bad decisions and simple mistakes, this showed that despite losing to the better team they are not far off being the side that Butterworth knows they can be.

Coach Butterworth said: "I was more than pleased with many aspects of the performance including an 80 minute stint from Gleeson, strong D and running from Lewis Butterworth and Nick Hargreaves and a useful return from Tala. Also 16-year-old Jack Green in his first game looked strong and capable in every aspect of his game."