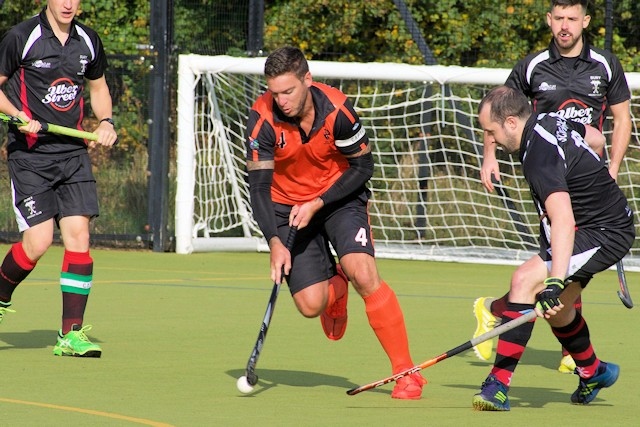 Rochdale took on top of the league Wigan on Saturday 14 March, who knew that a victory would guarantee they finished the season as champions.

Both teams had enough players despite the worst health crisis for a generation and on the advice of England Hockey, they just got on with it. With eight goals, one of which was frankly an international standard drag flick and a healthy competitive spirit throughout, it wasn’t a bad final game, despite the result.

Straight from Wigan’s push back, it looked like it was going to be a hard day for Rochdale, as they comfortably kept possession for the first few minutes despite Rochdale’s pressing. It was not long before Wigan started to progress the ball forwards to try and find an opening in the Rochdale defence. The first attempt came down from Wigan’s strong side (their right wing) but the first team newcomer Graham Broadley got his stick down early and blocked the hit.

Rochdale were not completely outplayed in the opening exchanges and did create a few attacks of their own, but as they pressed higher up the pitch Wigan were able to use their pace, fitness and substitutes to start forcing penalty corners. The first attempt at a drag flick was fearlessly closed down by first runner Luke Rosebury, though he did take a hit in the head as it flew up off his stick. The subsequent penalty corner was cleared by Kieran Hunter but as Wigan earned a few more penalty corners it was to be sooner rather than later it ended up in the back of the net.

After trying a few switches that didn’t come off, Wigan tried a drag flick again. It was trapped well D top and flew over the front runner, but was blocked strongly on the line by Danny Bowe. Unfortunately the injector had moved to the post after playing the ball in and was well positioned to sweep the rebound in.

The game could have taken a different course as Rochdale created a few great chances with some good forward play. Perhaps the best one was a swift one two on Wigan’s 23m line, creating the room for Dave Gowers to fire a cross to the back post, where Aaron Hunter came agonisingly close to levelling the score. Rochdale also won a few penalty corners but unfortunately were unable to convert.

With Wigan’s ability to retain possession, fitter legs and substitutes, it was only a matter of time before it started to tell on Rochdale’s bare eleven. As the possession started to turn into chances, it was not long before Wigan started to increase their lead with some well worked team goals giving Wigan a 3-0 advantage going in to half time.

Rochdale managed to get one back after the break from a penalty corner. The injection was fast and accurate, it was controlled D top by captain Michael Waddicor who opened up the angle and struck it fiercely towards the bottom corner. A Wigan post man did get a stick to it, but it proved too hot to handle as he only managed to deflect it into his own net.

Hopes of a Rochdale comeback were to be short lived however as Wigan managed to add another two despite the valiant defensive efforts of centre back Danny Ramsbottom and goal keeper Brian Robinson. Wigan were to add a 6th from a penalty corner as all the stars aligned for their drag flick routine. For those not familiar with a drag flick routine, this was a text book example. The ball was injected to the top of the D and controlled. The ball was then dragged along the bottom of the stick into the D before being slung into the top corner at about 70mph by Wigan captain Mathew Smith. As Rochdale captain Michael Waddicor said to the opposition, 'sometimes you just have to hold our hands up and say great goal'.

Rochdale were to add a second at the close of play, with the a skilful and tenacious solo effort from Peter Ransome. With the ball at Wigan’s 23m line he drove at the D, rounded two defenders despite being tackled twice before accurately forcing the ball past the keeper into the bottom corner for a well-earned consolation goal.

Captain Michael Waddicor said: "It was always going to be a difficult game today as Wigan needed the win. They consistently showed throughout that they put their time on the training ground to good use and always looked like deserving champions.

"That said, it wasn’t completely one-sided, and the lads did score two good goals and defended well against relentless opposition. We achieved our objective this season of staying up and giving some new players from the second team the chance to play at higher level.

"We can now have a well-earned break before deciding what next season’s objectives are."

The Flying Horse Man of the Match went to Michael Waddicor.