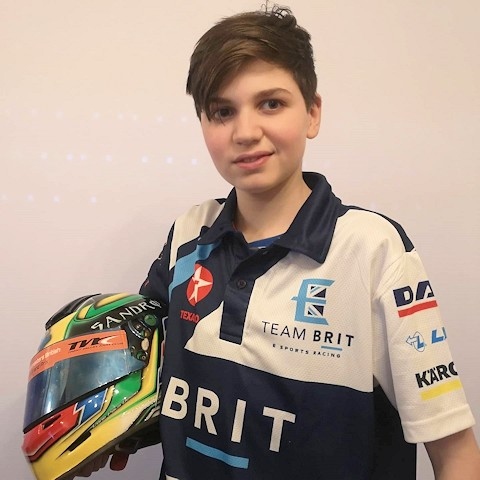 A 13-year-old karting star with autism who lives in Rochdale will become part of racing history this weekend, as he joins team ‘Racing with Autism International’, which comes together for the first time in iRacing’s 24 hours of Le Mans.

On Saturday 20 June, 23-year-old Sandro Ballesteros will join the team in its inaugural race, testing the competition on the virtual track in an online version of the iconic endurance race.

Sandro was diagnosed with autism when he was three and had his first experience in a kart aged five. He began racing in Daytona Bambinos, and won his first Bambino Championship in his second year of karting, aged seven. In his first year of junior championships, he managed 4th and 5th place.

He has been sim racing for three years and helps others into motorsport through his Able Racing Project, sharing his experiences with his autism presentations in schools.

Team ‘Racing with Autism International’ has been put together by all-disabled racing team, Team BRIT, which is a champion for raising awareness and understanding of autism, and also supports ‘Racing With Autism UK’, a team of young karters, by helping them into competitive racing events across the UK.

Sandro, whose autism is often dubbed his ‘super power’ on the race track, has raced regularly with team ‘Racing with Autism UK’ and is a driver for eTeam BRIT, Team BRIT’s sim racing arm.

Sandro will take the second stint in the 24-hour endurance race, alongside his teammates, the top autistic drivers across the globe:

The team is managed by Max Spooner, manager of eTeam BRIT, who also lives with autism.

Long term, the aim is to enter 'Racing with Autism International' in some of top 12 hour and 24 hour sim races, showing the world just how competitive it can be.

Team BRIT also hopes to bring Armani Williams and Austin Riley to the UK later this year to join Bobby Trundley in some real track races as part of the Britcar Endurance series.

Sandra said: "Thanks to eTeam BRIT online events, during the lockdown I have been lucky enough to get to race with some of my heroes. The practice sessions with my Autism International teammates have been a lot of fun. We are hoping to get a good result and show the world what we can do... My dream is to drive at the real Le Mans one day, and my teammates have already shown me that you should never give up on your dreams."

The 24 hour race will be begin at 2.15pm on Saturday 20th June, Sandro is estimated to start at approx. 4.15pm and can be watched live at: www.iracing.com/specialevents/