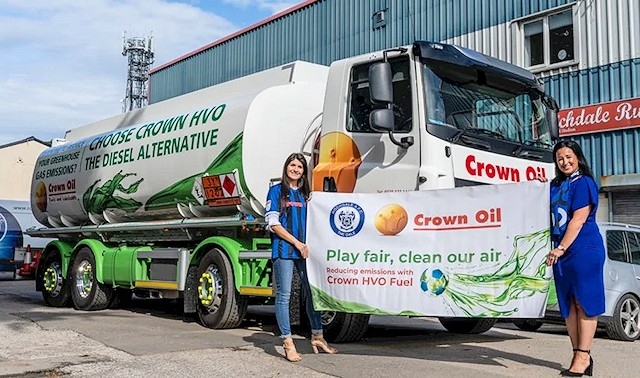 Crown Oil has signed a six-year extension of their sponsorship of Rochdale AFC's shirts and the stadium naming rights.

Bury-based fuel supplier, Crown Oil, has extended its sponsorship of Dale’s front of shirt and stadium naming rights in a record-breaking club deal for another six years. The firm has held the naming rights of the Crown Oil Arena since 2016 and has sponsored the front of shirts since 2012.

Chief Executive David Bottomley said: “Crown Oil is a wonderful fit with Rochdale Football Club. Not only are they locally based, but as a family-run business, they share the same vision and values. This is a fantastic commercial deal for both parties, and I would like to thank Crown Oil for their investment and commitment. We could not ask for a better sponsor. As always, we look forward to our continued partnership and working together in the future.”

Crown Oil Managing Director Matt Greensmith said: “We are extremely honoured to continue our partnership with Rochdale and it brings us great pleasure to sponsor the front of shirt and hold the naming rights to the Crown Oil Arena. We are proud to also supply our renewable clean diesel fuel, Crown HVO, to support the campaign Play Fair Clean Our Air, and would like to wish the club every success for the season ahead.”

Operating for over 75 years, Crown Oil is an independently owned and family-run business that has recently ventured into the supply of a cleaner diesel fuel alternative. Crown HVO (Hydrotreated Vegetable Oil) offers up to a 90% reduction in greenhouse gas emissions and a substantially longer shelf life. This new fossil-free, diesel alternative is being used by Rochdale AFC to help reduce its environmental impact.

Dale’s new kits prominently displaying the Crown Oil brand will be revealed and on sale towards the end of July when the results of the retro kit votes will also be unveiled.

A brand new RAFC online store is currently being developed and will be launched this next month with the new 2020/21 kit range.