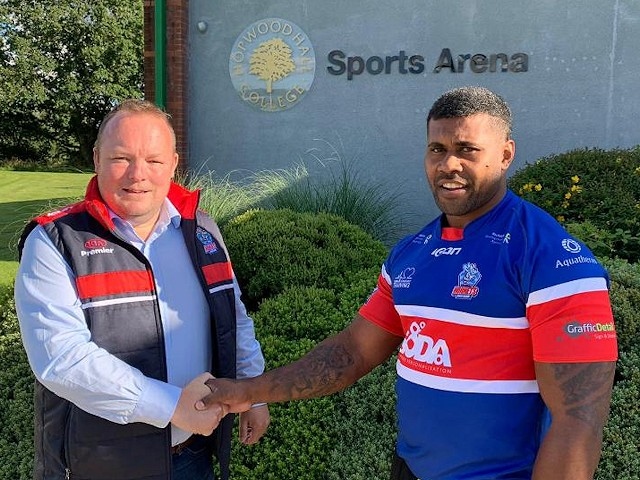 Rochdale Hornets has announced the signings of Joe Taira and Zac Baker for the 2021 League 1 season.

Taira will be well known amongst the fans at the Crown Oil Arena, and the Fijian will return to link up with Matt Calland for the 2021 campaign.

The powerful forward has spent 2020 in Australia, featuring for Mullumbimby Giants, who compete in the Northern Rivers Regional Rugby League competition.

"With what’s looking to be an exciting year ahead, getting the club back to the Championship where they belong is the ultimate goal.

"The coaching staff and board members are doing a fantastic job recruiting a strong squad and I can’t wait to be a part of it."

Taira first joined Hornets in 2016 from Rochdale Mayfield, playing three seasons including a club award-winning ‘Try of the Season’ in 2017 against Bradford Bulls.

The 31-year-old forward joined Batley Bulldogs ahead of the 2019 Championship season, making 19 appearances and scoring three tries under Matt Diskin.

“I played under Matt at Rochdale Mayfield, and I’m looking forward to joining him again in 2021,” said Taira.

“I can’t wait to play again and the goal is to get Rochdale Hornets back to the Championship.

“There’s a few local lads that have signed and some big names and I’m looking forward to playing with them.”

On the latest additions, head coach Matt Calland said: “It’s great to have Joe on board for 2021.

“He will give us some real grunt in the middle. He is an exciting player and will no doubt entertain the fans with his style of play.

“He is very aggressive in defence and an explosive ball carrier.

"Zac has enormous potential. He is another player from the great Rochdale Mayfield club and has played for Bradford Bulls academy as a youngster.

"He is currently over in Australia playing for the same team Matty Ashton played for and has agreed to play for us on his return. I am expecting a big 2021 from Zac."

Rochdale Hornets Chairman, Andy Mazey said: "Zac is another local talent who has followed in the footsteps of his mate Matty Ashton this year over in Australia.

"Rochdale lads in Rochdale shirts is something our supporters are energised by and it’s something we strongly believe in; therefore, I’m delighted we fended off competition to ensure Zac is returning to the UK to play for Hornets and not a rival club. This is another piece of solid business and great news and this lad is one to keep an eye on in 2021.

“The Fijian link is something very special in Rochdale and something everyone connected with our club is rightly very proud of.

"With this in mind, bringing Joe home was always high on the agenda and something we really worked hard to make happen for our loyal supporters.

“Joe is proven Championship quality and adds yet more fire power to Matt’s already impressive looking pack for 2021. He is without doubt a signing that our fans will reconnect with and will be able to support by getting behind and engaging with the soon to be launched supporters association so watch this space.”