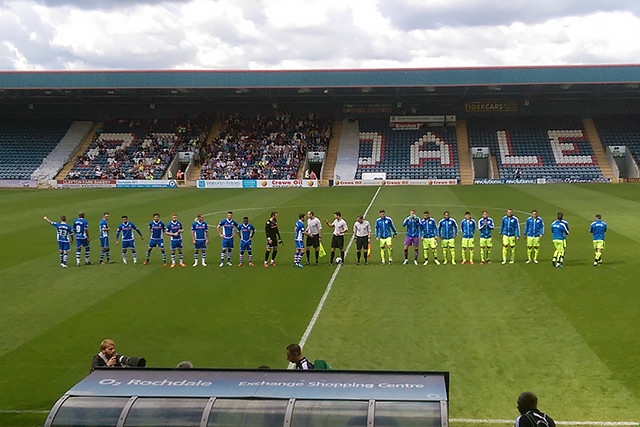 Rochdale v Huddersfield Town (photo from a friendly in 2015)

Dale fans can buy a match pass to stream the first competitive game of the season against Huddersfield Town this Saturday (5 September) in the first round of the Carabao Cup.

Under Covid guidelines, the fixture is being played behind closed doors, however, supporters can stream the live match on iFollow Dale.

A match pass costs £10, and kick-off is 3pm. Due to broadcasting restrictions, only fans living in the UK can stream the game.

All supporters, including season card holders, must purchase a match pass to stream this cup game under EFL rules. There are no complimentary streaming codes for this fixture.

When the League One season starts next Saturday (12 September) season card holders will be provided access to stream all Dale home league games under a new EFL framework.

The match by match streaming and season ticket offer is a temporary measure that has been put in place by the EFL whilst clubs operate at a zero or reduced capacity as a result of the pandemic, and will be reviewed in early October.

Leagues One and Two Streaming

League One and Two clubs are able to stream any match not shown live on Sky to fans who purchase individual match passes for £10.

The new framework for season ticket holders allows clubs to have the option to also stream all home matches, including those shown live on Sky. Dale has confirmed that season card holders will receive an iFollow match pass to stream a game live where it is to be played behind closed doors.

Clubs cannot provide access to fans to stream any away match, live on Sky or not, within a season ticket package.

Round One Carabao Cup matches that are not selected for live broadcast by Sky Sports will also be eligible for clubs to stream.

These will be available on a match pass basis at £10 per game.

Match passes can be purchased online via: