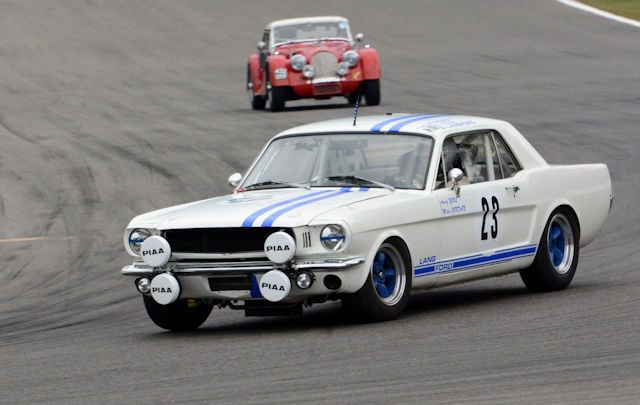 British rally driver Steve Brown will tick off yet another discipline on his motorsport list, by contesting his first-ever full circuit race at the wheel of a historic 1965 Ford Mustang during the Classic Sports Car Club meeting at Donington Park on 25/26 September.

The Rochdale driver would exchange the rally stages for the rallycross tour in 2019, driving a BMW MINI in the Toyo Tyres British Rallycross Championship, finishing third in his rookie season.

Now, in yet another change of discipline, Brown will get behind the wheel of an impressive 4.7 litre Ford Mustang in the popular meeting, making his full race circuit debut at the end of the month.

Brown has enjoyed a dynamic motorsport career in the past, with many years spent driving his iconic Nissan Micra Kit Car on the rally stages of the UK and latterly, in Belgium.

Success in the Flanders International Rally Challenge would mean he would seek out a new adventure in 2019 and after a taster of Rallycross in a one-off outing the previous year, he embarked on a full campaign in the British Championship.

Despite the steep learning curve, several podiums in the hotly contested single-make formula throughout the season meant Brown took third overall in the series after securing second place in the final round at Croft Race Circuit.

With 2020 set to see a return to the stages once again, Brown was lining up a new challenge for the forthcoming season, when COVID-19 hit the country, putting all motorsport on hold since March. As the sport began to return and the chances of a full campaign all but diminished, he started to look for other opportunities to get back behind the wheel and soon he had brokered a deal to drive something very different from his usual competition cars.

“Like most people I was really disappointed not to be able to compete this year and having your season put on hold is always tough, but of course there were more important factors going on so I just had to wait it out,” said Brown.

“As time went on I realised that there wasn’t a chance of doing a full season and pretty much had resigned myself to the fact that I wouldn’t be able to compete at all in 2020. Then, I had a chat with racer Andy Yool and before I knew it, he offered me a drive of his beautiful classic Mustang.”

Andy Yool Racing has a wealth of experience in the classic racing scene with Yool himself taking the thundering Ford to a class win at the Spa Six Hour race in Belgium. A seasoned Goodwood Car Club competitor, he often shares the Mustang with ex-BTCC racer and team boss Mike Jordan.

“This is an amazing opportunity to drive something very much out of my comfort zone but I must say a huge thank you to Andy Yool Racing for the chance,” added Brown.

“I’m not experienced at rear wheel drive, let alone a muscle car like the Mustang and on top of that, I haven’t driven the Donington circuit before either so it will be a very steep learning curve that’s for sure. Rallycross was about as close as I’ve been to a full circuit race but I`ll get a chance to get comfortable with the practice and qualifying sessions.

“It is a fantastic car and I`m pretty sure there will be huge smiles from me all weekend long.

“It’s great to be back competing again and what a way to return!”