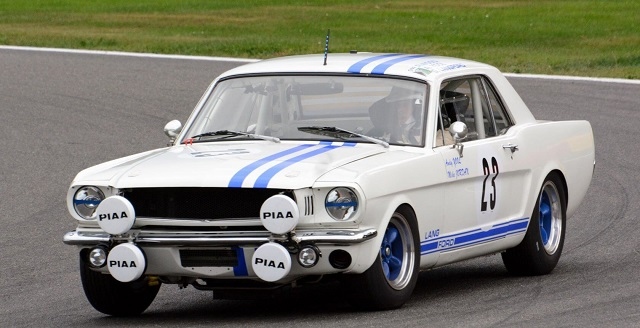 Rochdale rally driver Steve Brown made the most out of his racing circuit debut by enjoying two positive race finishes at the wheel of a 1965 Ford Mustang as he contested the Classic Sports Car Club meeting at Donington Park on Sunday 27 September.

Usually found at the wheel of his Nissan Micra Kit Car on stage rallies across the UK and Europe, Brown turned his attentions to the iconic race circuit in Leicestershire to make his racing debut in the CSCC - Toyo Tires / Watchdogapp.com Jaguar Saloon Championship and Verum Builders Open Series races over the weekend.

Not only would Brown have to adapt to a full tour of a racing track for the first time, but he would also be driving a powerful 4.7 litre Ford Mustang 289cui, the very car used to take a class win at the famous Spa Six Hour Race. With very little rear-wheel drive experience and having never contested a full race previously, the pressure would be on to bring the car home in one piece, made even more prevalent thanks to a packed grid of experienced racers.

During 2019, Brown contested the Toyo Tyres British Rallycross Championship in a BMW MINI, offering him a taster of competition against other cars on track. However, with the mixed surface nature of the sport, it would offer little help when getting behind the wheel of the Mustang for the first time on Friday meaning he would need to work hard to learn both the car and the necessary racecraft required to contest an event such as this.

A test session on Friday allowed Brown to acclimatise to his new surroundings and he took to the track for a handful practice laps ahead of the weekend’s meeting. The tricky circuit is infamous for its fast and flowing nature, ready to catch the unwary and inexperienced but Brown bedded himself in slowly, building the pace as the session progressed and building the much-needed confidence ahead of Saturday’s qualifying session.

With 42 cars out on track, all eager to get a time good enough for a prime starting position on the opening race of the day on Sunday, Brown found grabbing a clean lap tricky thanks to the traffic on track, but he continued as he left off on Friday, building a steady pace to line up 33rd on the grid on Sunday morning.

Two races were on offer and Brown stayed out of trouble throughout the day to bring the Andy Yool Racing Mustang home to a trouble-free sixth in class in both events.

“It has been a nerve-wracking weekend being in charge of such a fantastic car on a very difficult race circuit but I've enjoyed every moment,” said Brown.

“Pretty much everything has been new to me this weekend, the car, circuit and team but it wasn’t long before I started to feel at ease. It was important to get a good test session on Friday and that went well and set me up for the rest of the weekend. I also managed a quick trip to the Speedworks Motorsport Driver Development simulator to get an idea of the track layout beforehand which helped massively.

“The racing itself was very close and I was mindful that we needed to bring the car back undamaged so didn’t take too many risks. Donington is one of those circuits that can really catch you out so I basically drove my own races and was really pleased with 27th and 22nd overall as well as sixth in class, despite being a long way out of my comfort zone.

“I must say a huge thanks to Andy Yool for the amazing opportunity to drive such a classic car, it was a superb experience and a great chance to get behind the wheel in such challenging times.”