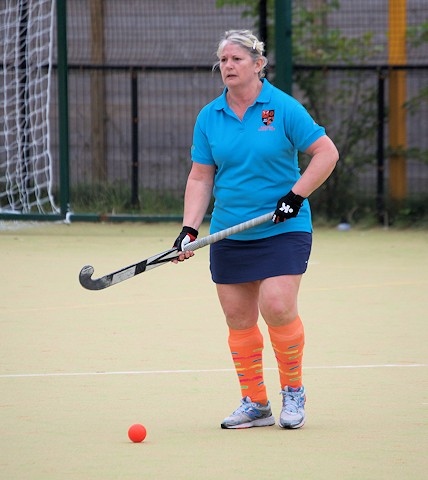 Gill Owen was named as player of the match

This weekend (4 October) Rochdale Ladies Hockey were away at Moss Park playing their second team and thankfully the predicted rain didn't show on a relatively warm Sunday morning.

After last week's defeat, Rochdale were raring to prove what they were made of and get back to the form they finished last season with. They started strongly, using quick passes and marking out the opposition to drive the play into their attacking end. Each time Moss Park intercepted or tackled to gain possession, Rochdale turned with determination to win back the ball they'd just lost.

Knowles took a side ball and belted it into the D where Burrell was waiting, she received it and did a nice, quick roll-out to get around a defender for a shot on goal. Unfortunately it cut just outside the post.

Not long after another side ball from Leech found its way to Ransome, who quickly passed it back now Leech had nipped around the Moss Park players in her way. Leech now had a clear shot to the D where Moon picked it up and crossed it to Newton who took a shot on goal only to be denied by the Moss Park keeper.

Moss Park got themselves a short corner which Rochdale excellently defended before Leech was able to find room to clear it from their D. Hodcroft showed the benefits of a fresh set of legs as she instantly made an impact when she was subbed onto the field. She hurtled up the pitch around the Moss Park defence into their D and took a quick shot on goal that was just saved.

After some excellent work by defence and midfield the ball found its way to Pickering, who flew up the right wing and crossed the ball to where Banks was waiting on the far post. She teased the Moss Park defence before tapping it over the line and into the goal.

At half-time Rochdale's spirits were lifted with their performance compared to what happened the previous week. Reiterating the need to use quick passes and to meet the ball they went into the second half optimistic because they were playing well.

The second half started with strong play from both teams, they were well matched and play bounced up and down the pitch as both teams drove for the attack but with neither managing to get through the other's defence and both goalies making some excellent saves.

Soon Moss Park were able to break through Rochdale's midfield with a group of attackers running for goal, and despite some valiant efforts from Rochdale's defence they were outmanoeuvred for Moss Park to equalise.

Rochdale weren't out yet and after some good work from the midfield to weave and pass between the Moss Park players Banks received the ball in the D, her shot on goal was saved but Ransome was there to claim the rebound. Unfortunately the Moss Park closed down her efforts to pass it off to Hodcroft at the top of the D and they were unable to make another attempt on goal.

Moss Park took the opportunity of a short corner to nudge into the lead with another goal but the Rochdale defence didn't allow them to repeat that in the next short corners.

The final score was 3-1 to Moss Park, and Rochdale's goal scorer was Jenny Banks.

Team captain Roisin Pickering said: "Despite the disappointing result, we had a lot of positives from the match. Our playing has improved since our last match and a lot of players adapted well to new positions. We have a lot of positivity to work with, to do even better next time."