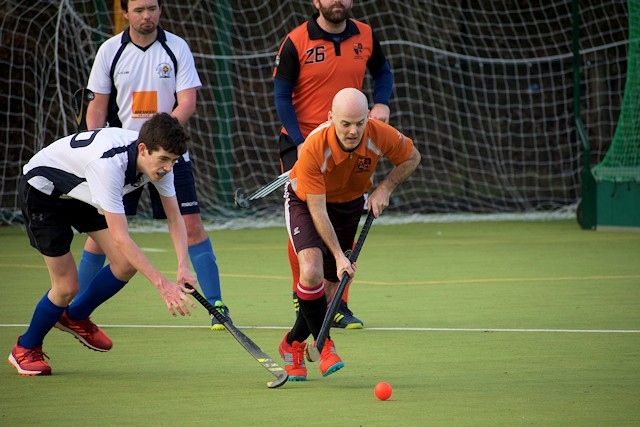 Rochdale Men's second team made the short trip to Wigan Sports Club on Saturday 10 October for the early top of the table clash with Horwich Mens 1sts. With both teams occupying first and second positions in the league after only two games played, it was all to play for.

Captain Adam Massey made two changes to the Rochdale side, Scott Hempsall-Jones stepped into left back and Mohammed Shakir took his place as the attacking midfielder.

With both teams looking to get a win from the fixture, the initial pace from the first push back was electric. Horwich starting the game, made the first push for a goal with some quick passing and with the home team looking very comfortable on the ball, they managed to find pockets of space in front of Rochdale’s defence. Peter Rogers and David Marlow had to be alert during the open stages to keep the forward line quiet and they snuffed out the majority of the threat with great ease, whilst simultaneously setting Rochdale away on numerous counters.

It was with this ploy that Rochdale fashioned many good chances exploiting the slow Horwich back line. In-form Andy Meanock found room to manoeuvre setting both Dean Close and Bjorne Brauns away down the channels to great effect.

With Close seeing plenty of the ball down the right wing, linking up well with the central Shakir, early chances came for the away side, with a flash across the ‘D’ just evading Kane Morgan. Brauns was also unlucky not to find the back of the net after initial work saw him fly away from his marker and drive finishing with a shot straight at the keeper and then making himself a nuisance to earn a short corner for Rochdale, who came very close to opening the scoring.

With the ball injected from Close and stop from Manny Ahmed, Hempsall-Jones skipped past the first and second runners to create an opening. With a sweet reverse hit, the ball took a slight deflection shaving the bottom of the post and going wide. It was a very good opportunity but not the last.

With both teams pressing and eager for the first goal, both were denied by the goalkeepers. Rochdale's James Deacy produced the better saves, with his reactions on each shot exemplary. His most notable save was a finger tip over the bar from close range.

At the other end the home side's goalkeeper used his feet to good effect denying Rochdale - Morgan’s first strike created a scramble across his line to kick away and he also denied a double shot from Brauns. Slowly the game started to become very even but the chances were in free flow and short corners were becoming a frequent route to a goal. With Horwich finding closer opportunities and Rochdale’s set plays less convincing, there was no way through for either.

Captain Adam Massey decided to make an entrance into the game midway through the first half, and with frequent changes made by the home side, the pace of the match didn’t waver. Ahmed started to find his range of passing, linking well with illustrious Meanock and playing through Morgan down the channels. Rochdale sliced through the static Horwich defence with great efficiency and poise on every occasion going forward.

As Rochdale enjoyed each build up to the home team's ‘D’ the finishing was less desirable. Hempsall-Jones finding himself through on goal but finishing wide and a slight deflection from a Close delivery eluding Massey from trapping the ball, Rochdale started to grow impatient and frustrations started to show.

Horwich, having to battle their way for chances in open play finally managed to score the first goal. After some neat work recycling the ball around the back line, they found some space down the right channel. With a bursting run along the baseline, the young Horwich player produced an intelligent ball to a waiting forward at the back post. A well-executed first-time sweep was met by defender Richard Saggerson on the line, but the power of the shot made the ball bounce away from his stick, and he was helpless to stop the forward's second attempt.

The goal took the sting out of Rochdale initially, but they gradually came back into play as Horwich sat deep, content with their lead. Meanock now growing in the game started to find space further forward playing intricate hockey in close quarters to bring in Saggerson and Liam Nutter now in attacking wing back positions. With Horwich staying deep, any delivery out wide found a cluster of players committed to keeping the score line in their favour closing out the first half.

After a brief talk at half time, the second half started with Rochdale now finding a stubborn Horwich team deploying a defensive midfielder in front of the defence making the task to score even more difficult.

Rochdale were to find themselves on the back foot shortly after half time with a quick break resulting in a free hit outside the 25-yard line. It was at this point Rochdale found themselves 2-0 down after Ahmed lost concentration by leaving his marker after a quick one two. With the move in full force, the Horwich forward with time and space drove down the base line and his cross shot squirmed into the net at close range leaving the unfortunate Deacy beaten.

As it was still early in the second half Captain Massey started to urge his players forward with Brauns and Hempsall Jones driving forward at each opportunity cultivating in chances for Shakir and Morgan.

The match started to turn scrappy in the middle as both teams were guilty of giving the ball away with a more direct approach. Marlow, playing like hockey’s version of Fabio Cannavaro, stood out in particular, commanding the defensive line with great tackling and reading of the game. Throughout the contest the defender read each play Horwich tried to muster earning him the Flying Horse man of the match award.

On many occasions Marlow had the skill to tackle and carry the ball whilst evading any tackle against him and find Nutter and Saggerson in advancing positions. With Rochdale taking more risks forward, there were opportunities coming thick and fast. Nutter now pressing forward in support found joy against his opposing player pushing him further back whilst picking off any pass directed at him allowing quick breaks forward.

With both side's defences on top chances were very few; Ahmed was unable to break away in the ‘D’, Brauns was stopped by the protective guard in front of the defence and Massey could find no way through a barrage of defenders for a shot, so Rochdale started to look to a set play.

With clever build up from Rochdale, Shakir, Hempsall-Jones and Close all found feet inside the ‘D’ to win short corners, but all in vain as Rochdale continued to squander golden opportunities to get back into the game. With the game stretched at both ends and Horwich finding chances down the wing, the final ball continued to elude the away side.

Eventually after more persistence the home team finally conceded what was to be Rochdale’s only goal from a set play so far this season to secure captain Massey’s first goal of the season. Set up for a first time strike, Close’s perfect injection was met with a solid stop at the top by Ahmed, with a slight push into the ‘D’ Massey struck a venomous shot toward goal striking a helpless defender's stick and flying high into the net.

It was now 2-1 and Rochdale went to a full press for an equalizer with the 70 minutes fast approaching, bombarding the home team and looking for an equaliser during the last moments. Close delivered out wide for Morgan who turned the defender to only shoot wide, Hempsall-Jones delivering aerials trying to find a route down the channels and an excellent long ball out wide by Shakir found Massey in the ‘D’ and the resulting chance was the closest Rochdale came to finding the equaliser.

The match was to end 2-1 with Horwich cementing the result they deservingly worked hard for, but on any other day the result could have been very different.

Dave Marlow was named The Flying Horse man of the match.