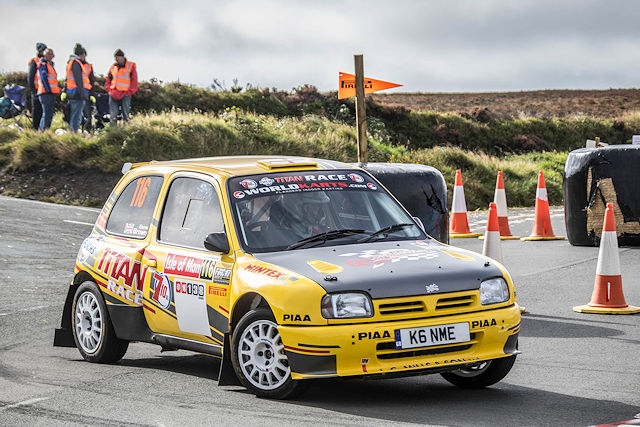 Brown in action in the Micra

Steve Brown ensured his return to the stages was a positive one, as the Rochdale driver scooped a class podium at the Cotswolds Stages Rally in Gloucestershire last Saturday (31 October).

Despite being out of the driver's seat of his Nissan Micra Kit Car for over two years, Brown proved that he had lost none of his flair by taking 20th overall and third in class at the tricky Down Ampney based event.

Brown, co-driven by Paul Stringer was also due to head to Oulton Park for the opening round of the Motorsport News Circuit Rally Championship this weekend, but COVID-19 restrictions have forced postponement until a later date.

As a rally driver at heart, Brown has been longing to return to the stages thanks to a change of direction during the 2019 season. After a ‘one-off’ outing in a BMW MINI and the BTRDA Rallycross series in 2018, he was offered the chance to contest a full campaign the following year in the Toyo Tyres British Rallycross Championship.

The transition was a success, claiming third place in the series but, aside from a further outing in a historic Ford Mustang at Donington Park, Brown has been eager to return to rallying since his last event in October last year.

Sadly, after putting together a programme of Belgian events for the 2020 season, the pandemic cut short his plans and like many others, he has sat out most of this season.

The South West event would mark Brown’s first foray back to the stages and offered the perfect shakedown ahead of the MSN Circuit Championship which he was aiming to contest thanks to most of the rallies taking place over the winter period.

A traditional airfield style `single venue` stage event is often a simple affair, but the very nature of the surface and conditions meant the Cotswolds Stages would be anything but easy for the returning rally man. A technical glitch on the opening stage of the event cost Brown a significant amount of time, but once fixed, he was able to settle back into a rhythm and climb the leader board.

Being seeded outside of the top fifty, 20th overall was a welcome result for Brown who professed to enjoy the difficult and muddy broken concrete stages.

“It's great to be back rallying again, I`ve really missed this,” said Brown.

“Down Ampney is not my usual choice of event but we were eager to get some seat time ahead of the Oulton Park rally and make sure the car was running as it should. That proved valuable after our stage one problems but once they were sorted it all fell into place. I`ll admit I was a little rusty. It’s been two years this month that I`ve driven the Nissan so twentieth overall was a positive result considering the amount of time I`ve been away and that it was a full entry list. We have got out of this what we needed so I`m happy with the outcome, the changes we made to the car have certainly worked.”

With the current lockdown restrictions, Brown has had to re-evaluate his plans for the rest of the year.

“Of course it is disappointing that the first few rounds of the MSN Circuit Championship have been postponed until next year but there is no other choice at all. We were lucky to have competed last weekend at all so there are more important things going on right now. Either way, we will be ready to head back out onto the stages when it is safe to do so.”