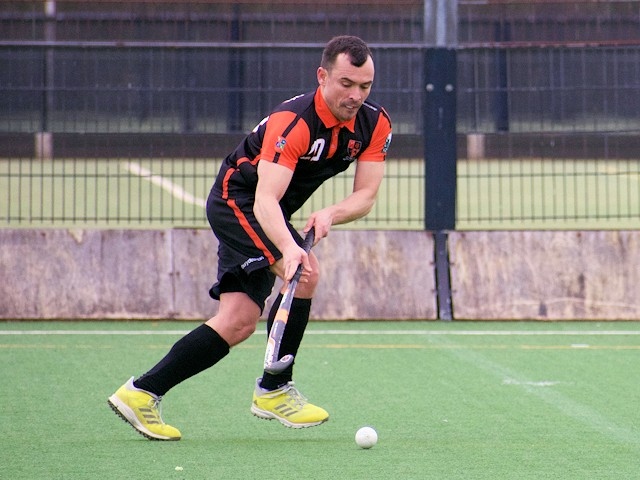 Following the end of the second national lockdown in early December, Rochdale were back in league action against Didsbury Northern Mens sixth team on Saturday 12 December. After benefitting from a friendly last week, Rochdale were keen to get back adding points to stay near the top of the table.

Rochdale started brightly and were soon dictating the play with a solid defence, a hard working midfield and a forward line hungry for goals. With some early chances putting pressure on Didsbury's back line, it wasn't long before a goal came.

A counter attack found Rochdale's front line who played the ball back, linking up with the oncoming midfield. The ball was moved to the right to captain Adam Massey, who opened the angle, crossing it to goal machine Kane Morgan for a first time slap hit into the bottom corner to open the scoring for Rochdale.

The early goal encouraged the home team who continued to apply the pressure, earning several penalty corners, from one of which a second goal was added. It started as a classic penalty corner routine with a powerful D top strike from Massey, it rebounded off the keeper to the top left of the circle and fell nicely for James Traynor, who has come on leaps and bounds in his first season in the men's leagues. He controlled it brilliantly and fired a fierce slap shot that squirmed between the onrushing keepers legs. It was spilling towards the goal line and probably would have gone over but Dean Close was taking no chances and made sure of it.

There was still a good bit of the first half remaining and Didsbury started to find a way into the game as the home side started to tire a little. The Rochdale defence held strong however with a good performance all round and Dave Marlow as magnificent as ever.

With a two goal advantage at half time, the team talk was mostly focused on trying not to let it slip. The second half started well for Rochdale, who largely dominated as they had in the first. However, as their legs began to tire and some confusion during a substitution, Didsbury got themselves back level.

This was just one of those goals nobody can do much about, not without a fair bit of time in the sin bin anyway. One of Didsbury's forwards picked the ball up just outside the 23m line, rode a few challenges, forced his way into the circle and creamed it into the top corner in a matter of seconds.

Didsbury's second goal was largely a product of a silly technical yellow card for having too many players on the pitch. Nobody is really all that sure on the details but with four substitutes coming on at the same time and in a bit of a mad panic as the centre back's contact lenses had come out, Rochdale ended up with 12 players on the pitch and the umpire had his hands tied, stopped the game and carded the Rochdale player nearest the sidelines.

Didsbury were not slow to capitalise on their legitimate extra man for the next five minutes. They worked the ball methodically round the field and created an overlap, which allowed an easy tap in at the back post to bring them back level.

However, with the man out of the sin bin, and boyed up by the fresh legs, Rochdale once again took control of the game. A well worked passage of play found Morgan in the circle. His initial shot rebounded off the prone goalkeeper, but he calmly collected it and flicked it into the open goal to restore Rochdale's lead 3-2.

Continuing to maintain the pressure but not over committing, the home side continued to create chances. It fell to the captain Massey who found space round the penalty spot to slap hit a cross in first time to double Rochdale's advantage.

With about five minutes left on the clock, the home team listened to the experienced voice of centre back Richard Saggerson and just kept possession of the ball, by moving it to wherever they had more players than the opposition. Rochdale successfully ran the clock out for a 4-2 home win that keeps them near the top of the table.

Captain Adam Massey said: "It was a solid performance from Rochdale which really shows how well this team is developing. The defence were great, the midfield created and had a phenomenal work rate plus plenty of goals from the forwards and well deserved Flying Horse man of the match for Andy Meanock who was excellent throughout the whole game.”