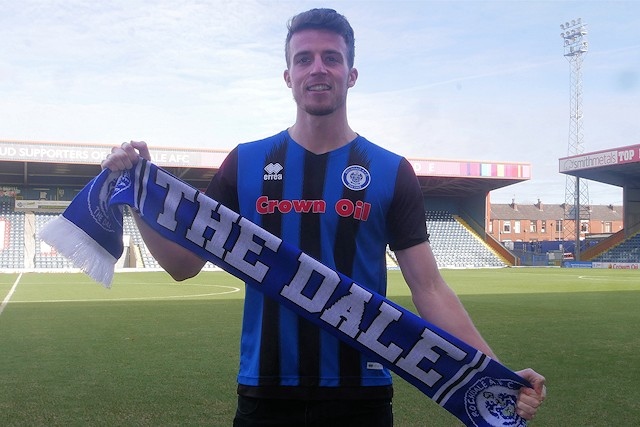 Rochdale AFC has announced the signing of Conor Shaughnessy from Leeds United.

A midfielder who can also operate in defence, he has agreed an 18 month contract with Rochdale.

Shaughnessy began his professional career with Reading and, after four years with The Royals, joined Leeds United in 2016.

He made 15 appearances for the Elland Road outfit in his time there, as well as enjoying loan spells at Hearts, Mansfield Town and Burton Albion.

The 24-year-old has also represented the Republic of Ireland at various youth levels, including earning three caps at under-21 level.

He says he is excited to get started at Dale.

“There were a few clubs interested, but I had a really good conversation with the manager here about the way he plays,” said Shaughnessy.

“I’ve watched a few games, seen the style of play, and it’s really attractive football to me. It suits me as a player and how I like to play, so it was quite an easy decision.

“I had the meeting with Brian which went really well. I met the staff, had a good chat, and since then it’s been getting things sorted with Leeds.

“I’m so excited to get started now. I can’t wait to get on the pitch, play regular football, meet the lads and get right into it.”