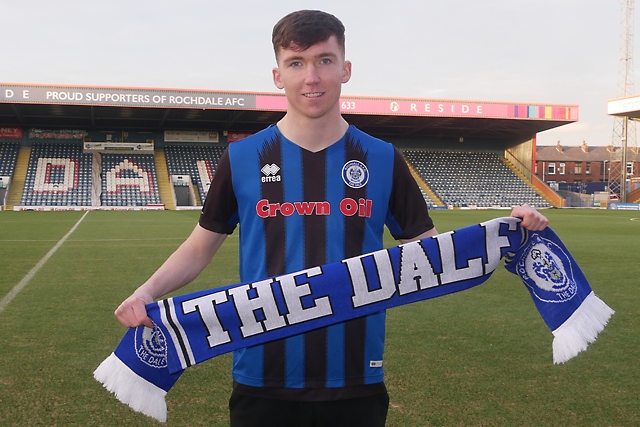 Rochdale earned only their second home win of the season - their first three points at home since October - with a 2-1 win over relegation rivals Swindon Town at the Crown Oil Arena on Tuesday evening (13 April). Victory gives Brian Barry-Murphy’s side a glimmer of hope of avoiding relegation, although the team are still bottom of the table, five points from safety with six games remaining.

Coming into the game that was described as a relegation six pointer, both sides knew anything but a win would make it very difficult to escape the relegation dogfight and with that in mind, the Dale boss made three changes to his starting eleven with experienced defender Paul McShane and midfielders Stephen Dooley and Aaron Morley also getting starts. Matty Lund returned to the bench after missing several weeks through injury.

Swindon started the day one place and four points ahead of Dale and they started the game on the front foot. Hallam Hope drilled a shot just over the bar from the left corner of the area whilst Jay Lynch tipped a Scott Twine effort from 20 yards out around the post.

Dale took the lead in the 12th minute with their first meaningful attack and it was a sublime finish from wing back Jimmy Keohane. The Irishman picked up from a cross by Ryan McLaughlin before switching to his right foot and curling a beauty in off the right-hand post for his seventh goal of the season.

Stephen Dooley, in the starting eleven in place of Conor Shaughnessy, was having a terrific game but almost gifted Swindon a leveller on the half hour mark. The midfielder was trying to play out of defence when he was caught in possession on the edge of the box by Jack Payne. The diminutive playmaker made space for a shot which Lynch did well to close down and block with an outstretched foot.

Both sides had chances before the half time break. Twine’s 35-yard free kick was a dipping effort that Lynch beat away and with Bret Pitman about to pounce, Gabriel Osho was on hand to head behind for a corner.

Jake Beesley forced Camp into a low save when picked out by Morley. The striker’s effort was well saved by the Swindon goalkeeper; Jimmy Keohane’s follow up smothered behind for a corner.

Dale thought they had doubled their lead through Jake Beesley only for an assistant’s flag to cut short the celebrations. Dooley’s shot was brilliantly saved by Camp with Beesley on hand to nod home but the offside was given.

With the tension apparent it was a huge relief when Dale did get their second with Conor Grant netting his first professional goal on 64 minutes. A swift breakaway from Ollie Rathbone saw the visitors backing off with the ball finding its way out to Dooley on the right. His pass found Beesley and although his shot lacked power it deflected off a defender to the feet of Grant who had the simple task of tapping in from close range.

With the game seemingly in the bag, Swindon set up a nervy final few moments when they halved the deficit with two minutes left. Morley, in trying to shield the ball out for a throw in on the halfway line, gave possession to Swindon. Jack Payne sent a powerful ball across the face of goal where substitute Jordan Garrick was able to bundle in but Dale held on.

That result means Barry-Murphy’s side are now five points from safety with a game in hand on the four teams above them and will be looking for back-to-back home wins for the first time this season when Accrington visit the Crown Oil Arena on Saturday 17 April (12.30pm kick-off).