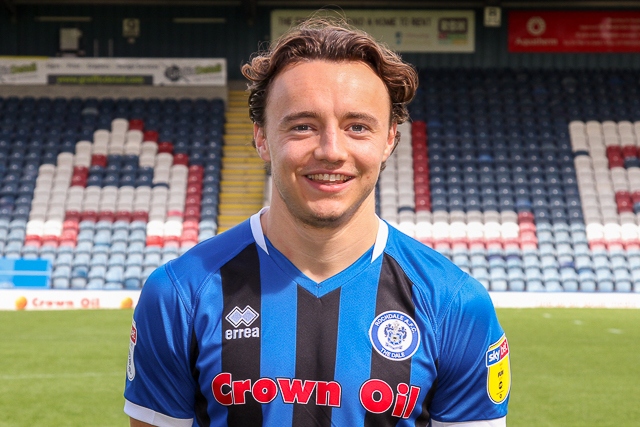 Rochdale made it three home wins in a row on Tuesday evening (20 April) as they kept alive their hopes of avoiding relegation to League Two with a deserved 1-0 win over play-off chasing Blackpool.

Ollie Rathbone’s shot from the edge of the area flew into the bottom right-hand corner to keep Dale in the hunt for survival although results elsewhere means Brian Barry-Murphy’s side are still five points from safety with four games left.

For the third game running the Dale boss named an unchanged starting line-up for the visit of Blackpool who had gone 16 games unbeaten coming into the game, but it was Dale who started on the front foot.

Aaron Morley’s delivery into the area was diverted goalward by Dooley who was denied by Chris Maxwell at full stretch low to his left.

Maxwell was again out to frustrate Dale moments later with a point-blank block from Conor Grant after Jimmy Keohane’s shot had deflected into his path.

The visitors rarely threatened although they saw plenty of the football in the last twenty minutes of the first half and they started the second half in a similar vein but couldn’t create anything that seriously tested Lynch until the hour mark.

A ball over the top looked to have caught Jerry Yates and Ellis Simms offside but when the flag stayed down Simms took a shot from 25 yards that Lynch had to beat away.

The only goal of the game came in the 69th minute with Ollie Rathbone being given time on the edge of the Blackpool area. The former Manchester United academy player curled a low shot around the despairing dive of Maxwell to net his third of the season but none could be more crucial that this one.

The visitors threw four substitutes on and piled on the pressure but in fairness, Dale withstood anything thrown at them with on loan Luton defender Gabriel Osho putting in a stelar performance.

The win moves Rochdale onto 42 points but with the three teams above Dale (Northampton, Wigan and AFC Wimbledon) also winning, the gap between Dale and safety remains at five points.  although they do have a game in hand which is the visit to AFC Wimbledon next Tuesday (27 April).