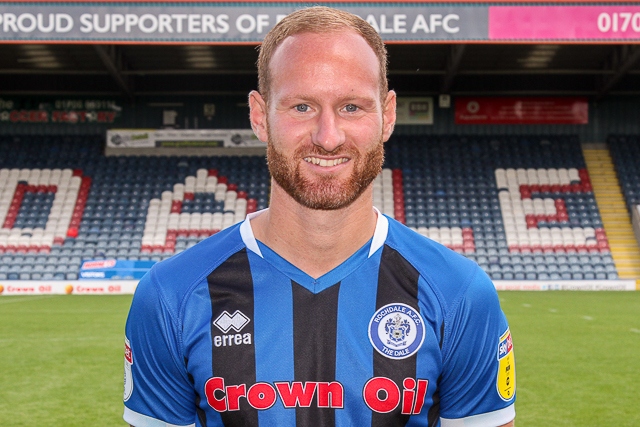 Matty Done scored a 97th minute equaliser on Saturday (24 April) to keep Rochdale’s hopes of avoiding the drop alive. Done clipped the ball over Will Jaaskelainen after latching onto a Conor Shaughnessy through deep into stoppage time.

Dale were heading for defeat when referee Andy Haines awarded a dubious penalty to the home side in the 90th minute. Jay Lynch saved Charlie Kirk’s penalty, but the striker slotted in the re-bound to nudge Rochdale closer to the drop until Done’s late heroics.

Dale boss Brian Barry-Murphy was boosted by the return from injury of striker Stephen Humphrys who took his place on the bench although Matty Lund was missing.

The first half saw few clear cut opportunities for either side. Ollie Rathbone saw a header tipped around the post whilst Lynch held easily from Kirk and Porter.

The best chance of the first half fell to the visitors deep into first half stoppage time. Ryan McLaughlin created space down the right with his cross headed at goal by Jimmy Keohane although the Irishman’s diving header rose high over the cross bar.

McLaughlin disguised a cross as a shot that Jaaskelainen did well to push over whilst O’Connell saw a header comfortably stopped by the Crewe keeper.

Jay Lynch acrobatically pushed an Antony Evans shot wide in about the closest either side came in the closing stages until the referee took centre stage.

Charlie Kirk got into the area from the right and when faced up against Aaron Morley, Kirk flung himself to the floor with Andy Haines falling for his antics and awarding a spot kick despite the Dale remonstrations.

Kirk dusted himself down to take the penalty himself which Lynch saved low to his right but when the ball landed back at the feet of Kirk, the 23-year-old slotted in un challenged.

It was a crushing blow to Dale’s hopes of avoiding the drop as we headed into seven minutes of added time. Results elsewhere meant Bristol Rovers and Swindon had already been confirmed as relegated whilst Northampton, Wigan and Wimbledon were all drawing in their respective games.

Dale threw everything at the opposition and when substitute Shaughnessy slid a beautiful pass through the defence, Done was quickly onto it to dispatch over the on rushing Jaaskelainen.

The point was nothing less than Dale deserved and with the other results it means Rochdale still have a glimmer of hope but they must beat Wimbledon on Tuesday evening at Plough Lane to stand any chance of survival.