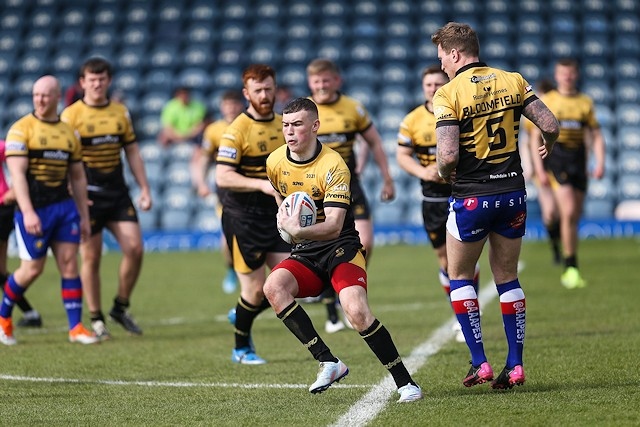 Despite a strong first half from Hornets, Barrow Raiders claimed a 40-4 victory in the Betfred League 1 at the Matt Johnson Prestige Stadium.

Hornets travelled without 13 first-team players due to injury or suspension, while Paul Brearley made his official debut starting at back-row.

Shaun Ainscough made his 200th career appearance, while Ben Moores returned to the starting XIII and was named at dummy-half. Tyler Walton also made his official debut from the bench, joining the club as a trialist.

It was a strong performance from Matt Calland’s side in the first half, and it was 18-year-old Dan Nixon, playing in the centres, who crossed for his first try for the club after a pass from Brearley sent the youngster crashing over for a 4-0 score.

However, just before the half-time break, Barrow scored their first try through Tee Ritson and a further penalty kick on the hooter from Jamie Dallimore gave the hosts an 8-4 lead at the break in a close opening 40 minutes

Barrow skipper Jarrad Stack scored early in the second half to extend the home side’s lead, while Zac Baker and Paul Brearley were both sent for 10 by the official for separate incidents.

Ritson went on to complete a hat-trick in the second half, while he was joined by teammates Callum Bustin and Carl Forster on the scoresheet.

Nixon was voted as the fan’s Red Soda Man of the Match in an impressive display from the Hopwood Hall academy product.