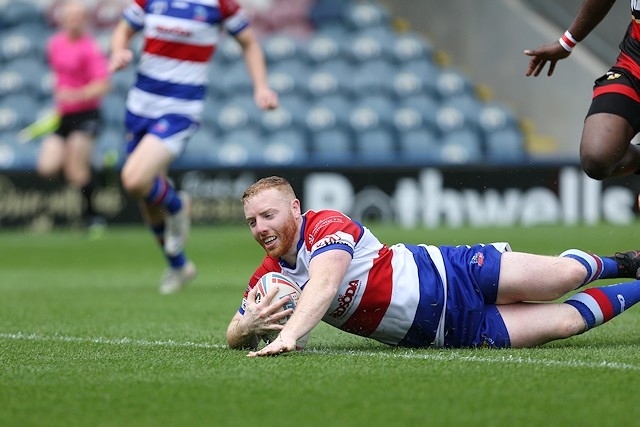 Lewis Sheridan was named man of the match

Rochdale Hornets claimed back-to-back wins for the first time this season with a 22-4 victory over London Skolars on Sunday (4 July) at the Crown Oil Arena.

Shaun Robinson opened the scoring in his first appearance since returning to the game, while Lewis Sheridan (2) and Tom Whur also crossed for four points.

It was a tight affair in the first forty minutes with the rain pouring. Matt Calland’s side started off strongly, with former Rochdale Mayfield amateur Zac Baker carrying four opposition players and only being metres short from opening the scoreline in the third minute.

Robinson crossed in the corner just seconds later in what looked like the opening score, but the touch judge had his flag up for a foot in touch.

Callum Ogden, who started the game in the number nine position, left the field on the 13th minute with a shoulder injury, adding to Hornets’ already-long list of injuries that include the likes of Gavin Bennion, Shaun Ainscough, Rob Fairclough and most recently Rangi Chase.

Hornets were first to break the deadlock on the 19th minute, this time Robinson being awarded the try in the corner on his second debut for the club. A beautiful long pass from Paul Brearley found Will Tate, playing on loan from Hull KR, to feed the winger to go over untouched in the corner. Josh Jordan-Roberts couldn’t convert from out-wide.

Rugby league veteran Fuifui Moimoi was introduced from the bench on the 23rd minute, much to the delight of the fans, with several solid runs for the 40-year-old.

There were plenty of mistakes with the wet conditions, and Jacob Thomas converted a penalty on the half-time hooter for a 4-2 score at the break.

The second half started like the first ended, with plenty of mistakes from both sides in sloppy conditions. Skolars were awarded a penalty just to the left of the sticks on the 44th minute for a late shot, and the opposition converted the two to square the score at 4-4. Baker was shown a yellow card for the challenge.

Lewis Sheridan, who is in good form for Hornets, restored the home side’s lead on the 51st minute. A fantastic switch of play from Danny Yates back to Sean Penkywicz, and a pass out the back fed the Rochdale fullback through a hole, and he dummied his opposition number to cross for a 10-4 score. Jordan-Roberts converting this time.

The game continued to be tight, and the play of the game came in the 73rd minute. Callum Marriott forced the mistake from Skolars with a huge tackle, and the hosts collected the loose ball and eventually Tom Whur, on loan from Hull KR, raced 30 metres to secure the victory.

A man of the match performance from Sheridan was completed six minutes later, as he supported a Penkywicz break for a full-time score of 22-4.