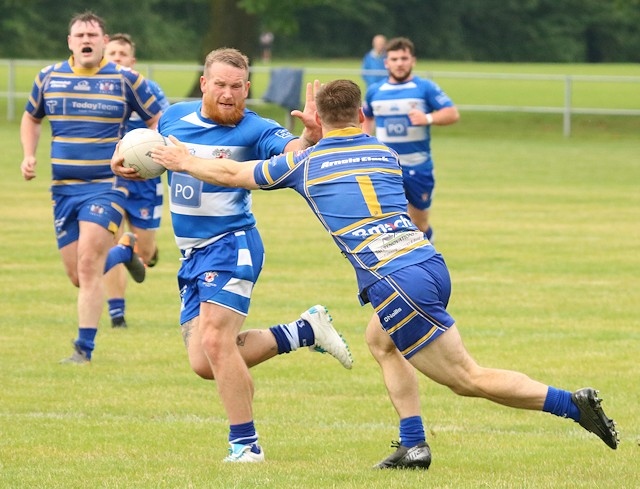 Mayfield arrived in Warrington with a strong side and full of confidence on Saturday 3 July. This good feeling was evident through the camp as the travelling supporters anticipated the performance to come.

Crosfield came out on fire and Mayfield looked like they hadn't got off the coach. In a woeful start to the game Mayfield allowed in two converted tries within the first six minutes and the writing was on the wall.

It doesn't matter what you do on the training pitch and how much hard work the coaches put in if the players on the pitch don't put it into practice as soon as that whistle blows. The next ten minutes showed that when they play to the plan and as a team these lads can do it and do it well. Crosfields couldn't live with them and the gap was cut to two points after tries from Aidan Gleeson and Lee Registe, and a Cole Connolly conversion made the score 12-10.

At this stage Crosfields were under the cosh and it looked like Mayfield were going to kick on and take the game comfortably. What happened next was truly baffling as they just crumpled, again. It was as if they thought they had done enough and could just sit back and go through the motions.

Crosfields, to their credit took their opportunities and looked like a side who wanted to win rather than a side who thought they were entitled to win. They played like a team, they played for each other and they gave it their all. If this Mayfield side had done the same there is little doubt that they would have been celebrating the win. Instead they shipped another ten points before half time. 22-10.

There were a few bright spots in a poor first half for Sam Butterworth's side, the returning Lee Registe looked strong and slotted straight back in and Shaun Hurley, back after injury was straight into the action like he'd never missed a game. The Gleeson try was brilliant as he and Ollie Coldman combined to show what the side is really capable of. The reality was that Mayfield weren't tough enough, weren't consistent enough and their goal line defence was awful against a side that was essentially from two divisions below them.

The second half saw a change as, whatever Butterworth and Wood said at half time seemed to take effect. For twenty minutes Mayfield played proper rugby and reaped the rewards as first Gleeson then Jack McConnachie grabbed tries, both converted by Cole Connolly. Connolly then added a penalty to give his side the lead for the first time, 22 - 24.

Mayfield had upped the pace and looked like the better side at this stage, and looked good for the win. But, it didn't last, as poor decision making and weak defence undid all the hard work. Crosfields snatched the lead back with minutes remaining. At 26 - 24 with seconds remaining Mayfield were awarded a penalty under the sticks and opted for the two points to draw the game, Connolly obliged and the game went to golden point. Unsurprisingly it was Mayfield's weak goal line defence that ultimately cost them the points as Crosfields went on to score the winning try.

In a disjointed performance Ollie Coldman and Jake Castree once again showed they are settling in. Brad Gartland and Liam Donnelly worked hard, while Nick Hargreaves for the second week running gave his all.

Sam Butterworth and Steve Wood must be wondering what they have to do to get this side on the right track after this performance. Once again the team showed they can play the game but also they showed some naïve weaknesses. Mistakes that they should not be making with the experience they have under their belts. They need to get to training this week and give it their all because next week sees Saddleworth Rangers at the Mayfield Sports Centre and they will coming for the win.