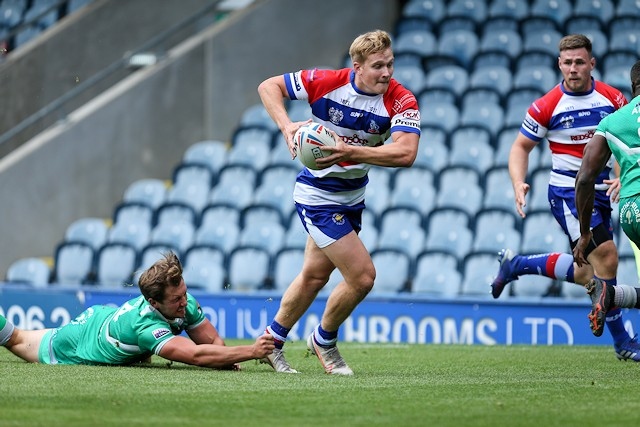 Keighley secured an away victory at Rochdale on Sunday 1 August in a high scoring clash with a 20-42 scoreline in Betfred League 1.

Ben Moores was set to make his 100th Rochdale Hornets appearance against Keighley Cougars at the Crown Oil Arena, while head coach Matt Calland recently added Reece Dean to his squad on loan from Newcastle Thunder and he was named in the halves alongside Danny Yates.

Hull Kingston Rovers duo Will Tate and Tom Whur were also named for Hornets on loan, with the former starting in the centres and the latter on the bench. Wales international Gavin Bennion also returned from injury for the first time since round 3.

It was a lively start to the clash as Hornets were pinned for a high shot inside the first set, which saw Keighley hit the front-foot early. Taylor Prell crashing over for the visitors inside the first minute for an early lead, converted by half-back Jack Miller for a 0-6 score.

Shaun Robinson was named back in the Hornets line-up and made a strong break through the middle just minutes later, only for his side to be pinged offside in the same play following a kick through and chase.

Hornets then hit back on 13 minutes, as a lovely cut-out ball from half-back Danny Yates found Tate out-wide to beat his opposite number and cross for the hosts, converted by Josh Jordan-Roberts for a 6-6 score.

It was an entertaining start to the game with end-to-end play, and loanee Dean looked dangerous for the Hornets, while Graham was causing the hosts some problems in the centres.

Ben Calland, brother of head coach Matt, left the field with a head injury on the 19th minute and didn’t return to the pitch.

Keighley regained the lead on 29 minutes, as Josh Slingsby dived over in the corner for a 6-10 score, and the hosts extended the lead just five minutes later as Prell found an intercept to race away.

Winger Mo Agoro added four more points on the half-time hooter, powering his way over out wide for a 6-22 lead at the break.

Hornets hit back early in the second half in a bizarre manner. Dean went long to find his winger on 42 minutes only to find Whur’s head, with the referee ruling play on and Tate was the first to react and ground the ball to give Hornets hope for a second-half comeback with a 10-22 score.

However, that was short-lived as Agoro scored his second just a minute later as he jumped highest to collect a Miller kick on the last and regain Keighley’s 16-point lead, only to be extended to 18 by Miller with a successful conversion.

Jordan-Roberts made a break on the 49th minute, and the following play Hornets captain Sean Penkywicz found Joe Taira with a slick pass to send his forward over under the sticks untouched to continue to give the home fans some hope, with a 14-28 score.

The points kept flowing, as Jack Miller added a penalty conversion for a 14-30 score on 54 minutes. Six minutes later, Aaron Levy crashed over to extend that lead once again for a 14-36 score. Ben Stead also got his name on the scoresheet, chasing down a sweet kick from Scott Murrell.