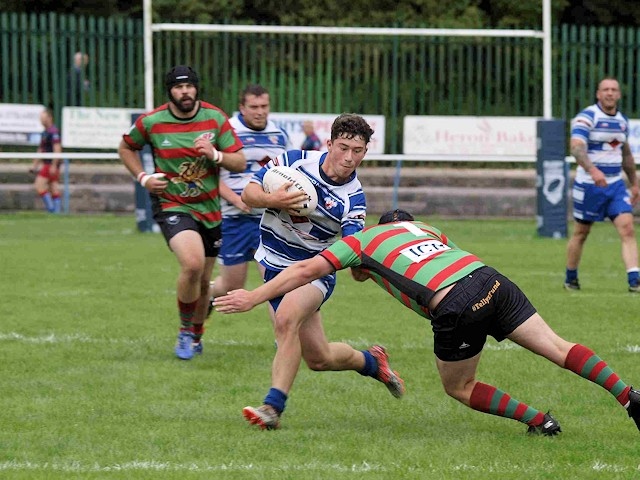 The Mayfield game against Woolston Rovers in the National Conference League, due to be played on Saturday 31 July, had to be called off due to a Covid-19 outbreak at Woolston.

Due to this postponement, the Mayfield side that plays in the North West Men's League was bolstered by the inclusion of a handful of senior players and they gained a hard fought victory on Saturday against top of the table Roose Pioneers.

Mayfield started strongly and were unlucky not to get an early score after some great rugby from Rob Kershaw, Mark Biggins and Stan Connolly. Roose lived up to their billing though as they hit straight back. Strong defence from Jacob Harrison kept them out but a skillful passage of play saw their scrum half dart over for a converted score, 0 - 6.

Mayfield were then again unlucky as the last pass went to ground on a couple of occasions. Kershaw soon showed his quality as he went in after a quick tap and Cole Connolly levelled the scores with the conversion, 6 - 6.

Mayfield picked the pace up now and a John Foy break was rewarded as his precision pass found Aidy Gleeson who put his side into the lead, Connolly converted 12 - 6.

Mayfield were looking good with most of the play coming off Neil Connolly and Gleeson, the former rolling back the years as he made his first appearance with his son Callum. Kershaw stepped in again to round off the first half scoring as he finished a great cross field move, Connolly again slotted over for the two points, 18 - 6.

Mayfield started the second half strongly and when the powerful Nick Hargreaves smashed his way through to score after a Cole Connolly break, it looked like they were going to run up a cricket score 24 - 6.

Roose obviously hadn't read the script though and when Mayfield took their foot off the gas they took their opportunities well, scoring three tries in succession to make it 24 - 22.

It was all to play for now and the next score was always going to be crucial. Luckily for Mayfield Jack McConnachie managed to get on the end of another flowing move and get the score which settled the nerves, Cole again converted, 30 - 22.

Stan Connolly then effectively sealed the game as he manufactured a try out of nothing for Elliot Scanlon-Wells, Cole added the two to complete the scoring for Mayfield, 36 - 22.

Roose, to their credit played right to end and scored the final try, 36 - 28.

This was a cracking game of rugby and kept the spectators enthralled right up to the final whistle.

There were some good performances for the field: Kershaw wasn't far off the Man of the Match award, especially after his 60m break which only ended when he seemed to run down the cellar steps; Biggins, whose work rate belied his years and Gleeson, who showed some great touches also came close but the popular choice was Neil Connolly who was class from start to finish and showed son, Callum, that there is life in the old dog yet.

The youngsters also put in a good show. Corey Newsham never put a foot wrong while Jacob Harrison and Sean McKenna showed they were ones to watch for the future.