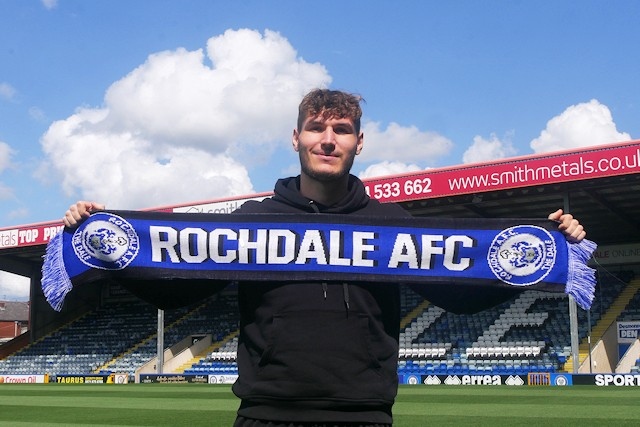 Rochdale Football Club has announced the signing of 19-year-old Josh Andrews on a season-long loan.

The 6ft 6 forward joins Dale from Birmingham City. He signed for the Blues in 2009 and came through the youth ranks there, before signing a professional contract in 2020.

After impressing for Birmingham’s under 23-side last season, where he scored nine times in 11 appearances, he joined Harrogate Town on loan during the second half of the campaign.

Upon his return from the EnviroVent Stadium, he helped Birmingham’s 23s to the Professional Development League title.

Andrews said: “I found out about this move a few weeks ago and as soon as I heard about it, I wanted to get it done. Some stuff got in the way but now that I’m here, I want to get started as soon as possible.

“I’m very, very grateful for this opportunity. The club has come down from League One and I’m hoping that I can help them get back to where they want to be.”

Manager Robbie Stockdale said: “We agreed this deal a couple of weeks ago and then circumstances with Covid related issues meant there was a delay in getting Josh here, but I’m really pleased that we’ve finally got him in and I’m looking forward to working with him.”

“He gives us a different option and he gives us some presence at the top end of the pitch. He should complement the players that we’ve already got here.”

Josh will wear squad number 19 during his time at Rochdale.