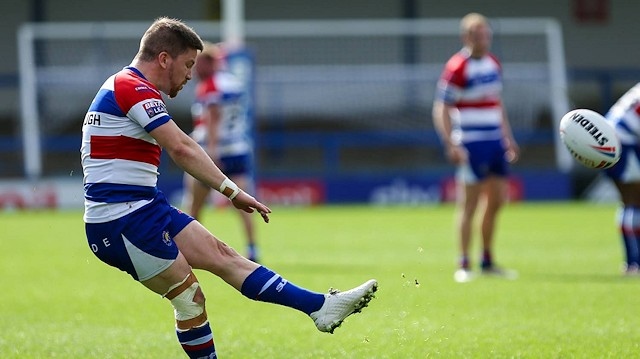 Matt Calland cashed in his get out of jail free card at the Crown Oil Arena on Sunday as Rochdale Hornets and Hunslet played out the game of the season.

It was a game Rochdale didn’t lead until the 76th minute thanks to a Rob Fairclough penalty goal which looked to have sealed a comeback win for the ages before Hunslet were awarded a penalty of their own after the full time hooter.

Rochdale started the brighter of the two sides and were unlucky not to score through Joe Taira who spilled the ball as he charged to the line but it was Hunslet who would take the lead. They made use of a penalty on half way to charge up field for forward Harry Kidd to crash over from close range. Jy-mel Coleman added the extras.

Hunslet's Aaron Jones-Bishop and Hornet's Fairclough were sent to the sin bin following a high shot on Shaun Robinson and a melee that followed the incident.

The home side made use of the field position and Sean Penkywicz dummied his way over for a cute Hornets try.

The Hunslet reply was immediate - Joe McClean crossed out wide after Jimmy Connaughton spilled the ball in contact from the kick off.

Hunslet were then reduced to 12 men again. Vila Halafihi was sent to the sin bin for a high shot deep inside his own half.

Hornets struck back immediately as Penkywicz and and Josh Jordan-Roberts linked up, with the powerful second rower charging over to level the scores.

Hunslet were handed the chance to nudge in front as Penkywicz was penalised for a dangerous throw. Coleman nailed the penalty goal from 42 metres out.

The visitors hit the straps as half time approached. A smart Brambani kick trapped Cian Tyrer in the corner and he was forced into touch five metres from his own goal line. From the turnover Coleman muscled his way over to ground the ball in the midst of a mess of Hornets bodies. He converted his own try from bang in front.

Hornets weathered the storm and good link up play between Robinson and Shaun Ainscough bought the home side 50 metres where they camped on the visitor's line and on the stroke of half time they shipped the ball wide for the returning Ainscough to slide over at the flag. Reece Dean made no mistake from the tee to reduce the deficit to just two at the break.

Hornets started brightly and kept their foot on the gas early in the second, forcing two goal line drop-outs before drawing a penalty ten metres out but they declined the opportunity to level the scores and instead ran the football which came to nothing.

Again, Rochdale showed little promise with the ball in hand and invited Hunslet pressure and it was disastrous for Rochdale. Coleman struck again, barging his way over under the sticks and converted his own try.

Matt Calland opted to shuffle the deck with the introduction of Ben Moores and Lewis Sheridan but another teasing Brambani kick caught Tyrer off guard as the full back carried the ball in touch.

Lewis Young turned the screw, nudging a kick in goal and trapping Sheridan for a goal line drop out and Hunslet made it count.

Frazer Morris and Jordan Andrade laid the platform in the middle as Brambani spun the ball out wide for Keidan Hartley to cross on the wing.

Hunslet extended their lead further with Young again finding space on the flank but Hornets regained the kick off and found their way up field. The introduction of Sheridan proved fruitful as he danced around a stretched Hunslet defence.

Young once again found himself in the middle of the action, this time on the end of a yellow card for a blatant professional foul. Sheridan collected a kick deep in his own half and raced down field but was prevented from playing the ball.

From the penalty Hornets pressed the Hunslet line and found a way over through the impressive Taira. Fairclough added the two to set up an exciting finish with Rochdale behind by six.

From the kick off Hornets found space in the middle and Fairclough ghosted through the Hunslet defence to feed Jordan Syme in support. Jordan-Roberts levelled up the scores from the tee with five minutes remaining on the clock.

The visitors were then gifted a penalty for offside 30 metres out. Fairclough stepped up to put Rochdale in front for the first time in the game and it looked as though Calland’s side had snatched victory from the jaws of defeat but there was still time left and it was heartbreak on the hooter for Rochdale. Fairclough was sent to the sin bin for a professional foul deep inside his own half and Coleman stepped up to nail the goal from out wide to wrap up an entertaining draw.