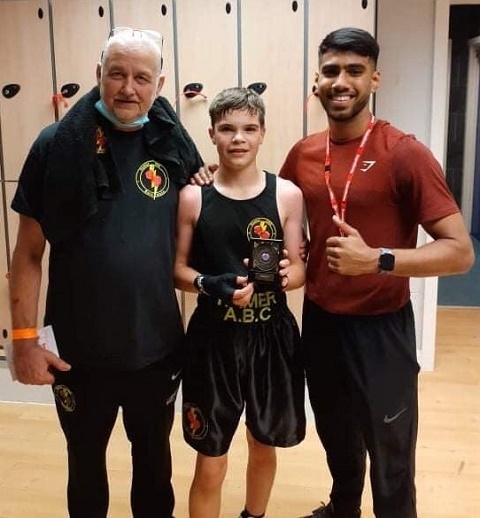 Charlie travelled to Croxteth Sports Centre in Liverpool on Sunday 19 September, where he met local boxer Lucas Oyadiran of No Limits Boxing Club in the national quarter finals, after winning the North West of England 44.5kg-46kg Schoolboy title.

The bell rang for the first round and both boxers rushed to the centre of the ring to exchange an accumulation of punches upon each other. This continued for a full minute as both boxers tried to implement their dominance and authority upon each other, and the excited crowd climbed upon its feet in appreciation of what was happening in front of them.

As the bout progressed, the Hamer boxer began to land solid right-hands to the chin of his opponent and the No Limits boxer began to back away slightly, which gave Charlie the impetus to continue to step forward and unload more punishing blows.

Both boxers continued to impress the crowd as they landed punch after punch upon each other.

Then just before the bell rang to end the round, the Hamer boxer forced Oyadiran towards the red corner post, whilst landing more hurtful punches which forced the referee to step in and administer Oyadiran a standing eight count.

In round two, the Hamer boxer rushed out of the blue corner to set another frantic pace as he continued to force Oyadiran onto his back foot.

Charlie unloaded countless punches upon his opponent and the No Limits boxer was forced into his own corner yet again, where the relentless Hamer warrior unloaded another accumulation of punishing blows to both the head and body, leaving the referee no option but to step in again and administer Oyadiran another standing eight count.

After the count, Oyadiran showed great courage by standing toe-to-toe with Charlie, as he tried to take the momentum away from the Hamer boxer. But Charlie had the drive and the power to force Oyadiran back onto the ropes, before landing even more punishing blows and the referee stepped in once again to end the contest and award Charlie the victory by a second-round stoppage.

Charlie now travels to Newcastle on Saturday 25 September to meet his next opponent in the National Semi-Finals.