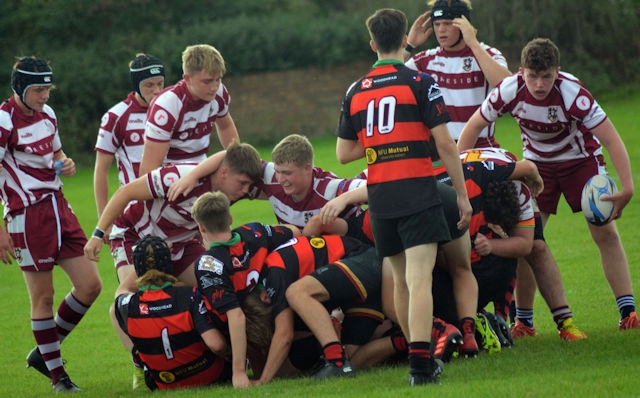 Rochdale Junior Colts made the long trip to Oswestry

Rochdale Junior Colts made the long trip to Oswestry, Shropshire for their second league match of the current campaign on Sunday (19 September).

The game played with full contingents through Rochdale lending a player to the home team.

In ideal playing conditions Rochdale were straight on the attack and, after Oswestry conceded a 5 metre scrum, Olly Mills - the Rochdale number 8 - was able to pick up and barge over for the perfect start (0-7).

More pressure from Rochdale resulted in a penalty, which was quickly taken and moved out wide to James O'Connell who outpaced the cover defence to score in the corner (0-12).

Just when it looked like Rochdale were going to pull away again, a dropped pass in their own 22 allowed the Oswestry fly half to hack through and score under the post (7-12).

However, this proved to be just a blip, and Rochdale were soon on the attack again. After several drives, Declan O'Loughlin burst through the defence and handed off the full back to touch down between the uprights (7-19).

The Rochdale forwards were clearly on top now and it was a credit to Oswestry that they kept playing, bringing in their backs at every opportunity and moving into the Rochdale 22.

From the ensuing lineout, the home team hooker missed his jumper and the ball was caught at the back of the line by Mills who made the break before chipping over the defence, catching his own kick and out-pacing the last defender to score an excellent individual try (7-24).

The first half ended with a further Rochdale score after more strong carrying - this time by Garrett Myers who forced his way over after a series of attacking rucks in the Oswestry 22 (7-29).

The second half was more of the same, Rochdale were now attacking from deeper and finding space in the defence with good running lines and some intelligent passing. From a scrum on their own 22, Mills broke blind, fed Ben Sunderland who linked up with Jacob Jackson, who in turn found Myers who put Will Simmons into space to sprint the 20 meters to the line (7-36).

It was pretty much one way traffic now as the home team tired and found possession at a premium.  After further good interplay between forwards and backs, Jackson broke the defence and even though brought down just short he was able to reach out and ground the ball (7-43).

Further good handling soon allowed Simmons to score again (7-50) and, in almost identical fashion, O’Connell scored again (7-55). There was just enough time for Mills to finish the way he had started with another pick up from a scrum to cross the line (7-62).

Still lots of little things to work on but nonetheless an excellent Rochdale performance. Most pleasing were the set pieces with near domination in the scrums and the lineout also functioning very well.

It felt appropriate that one of the work horses upfront should receive Man of the Match and two players improving week on week, Joel Rigby and Ben Hankinson both deserve special mention. Hankinson took the award for his scrummaging, lineout work (including a couple of steals), clearing rucks and ball carrying.

A mention also to Mitch Holt for another excellent kicking display.  Sterner tests lie ahead, but the signs are all positive for this Rochdale Junior Colts team.

The Junior Colts are in action at home at Moorgate Avenue in the 1st round of the Lancashire Cup this Sunday (26 September) against Aldwinians at 12:30pm.